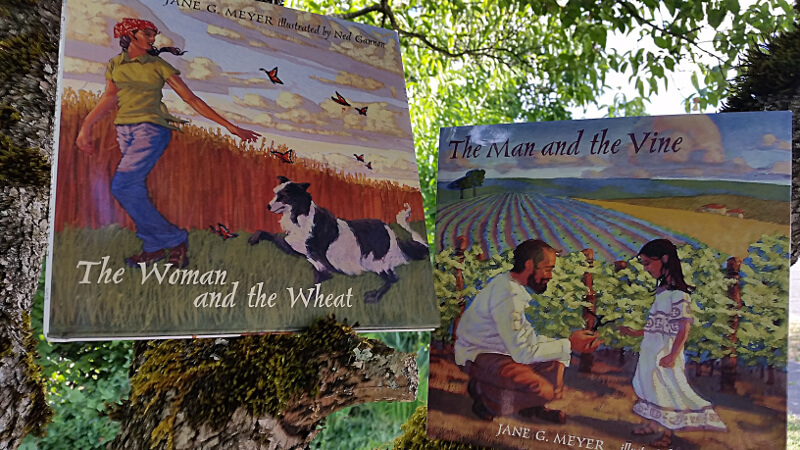 A dozen years ago, my kids were too old for picture books. So I didn’t see The Man and the Vine when it came out. And when its companion book, The Woman and the Wheat, came out, I didn’t see it, either.

And what I have missed for not having them!

If you’re looking for a literary meditation on the Eucharist, you could not do better than this pair of books by Jane G. Meyer. They are contemplative prose poems, as rich and deep as the soil, as beautiful and lyrical as the sun and the moon and the rain. You’ll want to spend some time with these works, letting the words and images take root and the joy grow loud in your soul.

These books might remind you of the segments of Mister Rogers’ Neighborhood where Mr. Rogers showed children how ordinary things, like crayons and candles, were made. They might remind you of In the Candle’s Glow, Elizabeth Crispina Johnson’s book that tells the story of prayer candles.

But please don’t think you have to have children to get these books. If you have no children in your life, get these books and shelve them alongside John Donne’s meditations or a book of akathists.

And perhaps, if you have children, you should get two copies of each, one for the children and one for you.

The Woman and the Wheat starts like a fairy tale: “There once was a woman who planted some wheat. She worked in the heat of a late summer day, wiping her brow as she sowed the seeds.”

The woman has no name. She is just a woman. She is any of us. She is all of us. And as she wipes her brow, we remember that God cursed Adam, saying: “By the sweat of your brow you will eat your bread, until you return to the ground.”

Time and work and prayer

Time passes in the story the way it does in the nursery story, “The Little Red Hen.” The woman sows the wheat, and watches and waits for it to grow. She harvests it (but, unlike the Little Red Hen, she calls her family and friends to come help her, and they come). She takes it to the mill, where the miller grinds it into flour. And then she bakes bread.

As she works through the year, the refrain is repeated, over and over again. For always, as she works, “on her lips were prayers of all sorts: for the rain, and the sun, and the moon, and the wheat – and the bread that was to come.”

And the bread that came wasn’t ordinary bread. It was bread for the Eucharist. It was the Bread of Life. She made it, and she brought it to Church, where it was cut and broken and pierced. It was bathed with wine.
And when the woman received the Eucharist, “She opened wide and the love filled her mouth … and the joy grew loud in her soul.”

The Man and the Vine also starts like a fairy tale: “There once was a man who planted a vine.”

The man, like the woman, has no name. A child reading the books will read a story of a particular man, of a particular woman. But adults will see the woman and the man as archetypes. They are all of us, cooperating with nature and with God to do holy work. That work is no longer a curse, but a source of joy and love.

I’m not an artist. But if I were, I’m not sure that I would have wanted to be the one to illustrate Meyer’s lyrical text. Her characters are a man and a woman. They are anyone, everyone. But you can’t draw universals. To put the story into images, you must make it particular. Ned Gannon had to take the universal archetypes of the poetry and make them into specific people.

That is, I think, a risky thing to do, to narrow a poem that way. But there is no choice, if a picture book is to have pictures.

And Gannon’s pictures are gorgeous. He filled them with saturated color and light. The land and the sky and the earth and the people are all warm and solid and real.

The White Cat and the Monk: A Review: This lovely book is a contemplative retelling of the Irish poem, Pangur Bán.

Father and Son: A Review: This lovely picture book is a Christmas story for little ones, and a meditation on the mystery of the Incarnation for adults.