The Story of Pelagia the Penitent 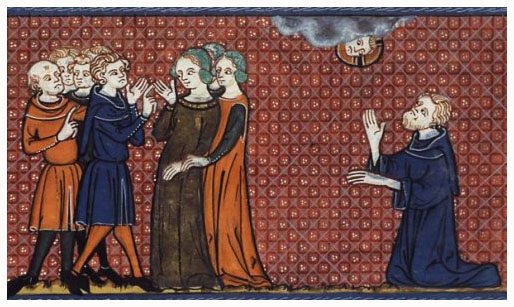 And so she became wealthy. She covered her body – the parts she chose to cover – in cloth of gold and pearls and precious stones. Even her slaves, who accompanied her everywhere, wore lavish clothing and golden torcs around their necks.

When she went about the city of Antioch, Margarita wanted to show the men of Antioch what they wanted. So before she set out, she made herself perfect. It took hours. When she was done, she gleamed and shimmered. She showed her bare head, her bare shoulders. She enticed.

And when the monks and clergy saw her, they looked away. They might be monks, but they were still men. Her beauty and her brazenness affected them, too.

Most of them, anyway. Bishop Nonnus saw her, and he didn’t turn away. He didn’t see a body. He saw a person, one who had worked diligently, persistently. And he admired that in her. “We could learn from this woman,” he told his brother monks. “She works harder to make her body beautiful than we do to make our souls virtuous.”

And Bishop Nonnus began to pray for the courtesan Margarita.

Margarita Receives Back Her Name

It wasn’t long afterward that the courtesan Margarita heard Bishop Nonnus preaching. He spoke of sin and virtue and God’s judgment. And as she listened, she understood. The men who came to her had never wanted her. And she had never wanted them.

She sent her slaves to bishop Nonnus, asking to be baptized. He refused at first, wanting assurance that she would truly change her life. She gave him no assurance. Instead, she told him that, if he didn’t baptize her and instruct her, then God would hold him accountable for all of her sins at the last judgment.

That was enough for Bishop Nonnus. He found a godmother for Margarita, a deaconess named Romana. And he baptized her. And when he baptized her, he took the name Margarita away from her and gave her a new name. He restored to her her real name, the name her parents had given her when she was born. She was again Pelagia.

And Pelagia found that she no longer wanted her great wealth. So she had her steward inventory her belongings, and she brought them to Bishop Nonnus to distribute to the poor. She freed her slaves. She studied the faith with her godmother.

But there were still men who wanted Margarita. So Pelagia did the only sensible thing she could do. She became a person that men wouldn’t want. She became the monk Pelagius.

The Monk in Jerusalem

Pelagia left Antioch and went to Jerusalem. She found a cave near the Mount of Olives, where she lived as a recluse, Pelagius. She spent her time praying and fasting.

It’s possible that she had told Bishop Nonnus her plan before she left Antioch, because three or four years later, he sent Deacon James to visit his friend, the monk Pelagius.

The local bishops were apparently found this news disconcerting. They tried to hush things up, and they buried her in her cell. But it wasn’t possible to silence her story, and her cell became a place of pilgrimage.

Apolytikion of St. Pelagia the Righteous

The image of God, was faithfully preserved in you, O Mother.
For you took up the Cross and followed Christ.
By Your actions you taught us to look beyond the flesh for it passes,
rather to be concerned about the soul which is immortal.
Wherefore, O Holy Pelagia, your soul rejoices with the angels.

Venerable Vitalis, Patron of Prostitutes: Vitalis left his monastery and moved to Alexandria. He got a job, and started visiting prostitutes. But it wasn’t what everyone thought.

The Emerald of God, St. Euphrosyne of Alexandria: Euphrosyne didn’t want to marry the man her father had picked out for her. So she gave away all her wealth, took the name Smaragdos, or Emerald, and became a monk.

In This Family, We Don’t Judge: Judging others is easy. But the saints teach us what it means to live without judging.