How Theodora of Alexandria became a monk and a mother 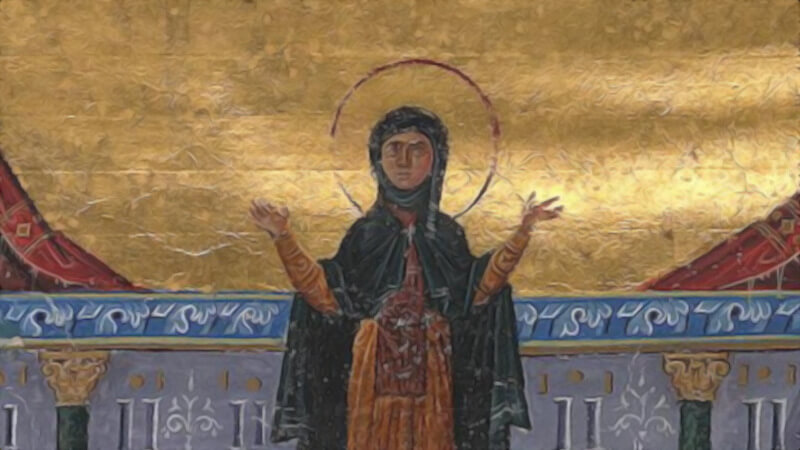 There are many saints named Theodora. This Theodora lived in Alexandria in the fifth century. She was married to a man named Paphnutius, and by all accounts they had a happy marriage, living together in harmony and love.

Theodora was beautiful. And so a rich man wanted her. He sent her letters and gifts and promises of riches. She refused them all. So the rich man hired another woman, who some stories say was a sorceress and some say was a woman of loose morals, to help him seduce Theodora.

This woman made herself a confidante to Theodora. Theodora told her that she couldn’t accept the rich man’s offers, because the sun itself would be witness to her sin.

The woman told her that was true. But if she sinned at night, when the sun couldn’t see her, well, then, God wouldn’t be able to see her either. Theodora accepted this counsel, and met the man for a tryst in the dark of the night.

When the sun rose, her heart was broken. Whether God had seen it or not, she knew she’d sinned against her husband. Crying and full of shame and self-reproach, she went to visit the abbess of a nearby monastery. The abbess, moved by her sorrow, questioned her gently, but Theodora wouldn’t tell her what she had done. She insisted that she didn’t know why she was so sad.

Theodora was devastated. She confessed everything to the abbess, fearing that God would never forgive her. The abbess reproved her only for not seeking guidance while she was being tempted. Then she comforted Theodora with words of God’s compassion, reassuring her that, however great her sin, God’s mercy is greater yet.

Theodora returned home, but the sight of Paphnutius made her guilt and shame come roaring back. She wanted to enter a convent to repent of her sin, but she knew that her husband would never agree.

When Paphnutius was away from their home, she cut her hair, put on men’s clothing, and took on the name and identity of a man. As Theodore, he walked 18 miles to a men’s monastery outside the city. There, he asked to be taken in as a monk. And soon the monk Theodore was loved and respected by all.

Theodore is accused of fornication

On one occasion, the abbot sent Theodore to Alexandria to purchase bread for the monastery. On the way home, he stopped at the monastery of Enata to spend the night.

In spite of two years of stringent fasting and vigil, Theodore was still beautiful. A woman who was visiting the monastery tried to seduce him. Theodore refused. So the woman found another lover, and became pregnant. When her father wanted to know who the father of the child was, she said it was the monk Theodore.

The monks of Enata brought the child to Theodore’s monastery, accusing him of fornication. At first the abbot didn’t believe the accusation, but eventually all of Theodore’s brothers turned against him, and the abbot as well. They turned him out of the monastery with the child.

Theodore accepted the accusations and the punishment willingly. He believed it was a just punishment for the sin of adultery which he had committed when he was still Theodora. He lived with the child for seven years in a hut not too far from the monastery. Shepherds provided milk for the child, and he ate what vegetables he could gather.

After seven years, the monks begged the abbot to welcome Theodore back to the monastery. He returned with the child, and for another two years, the two of them lived in seclusion, as Theodore taught the child everything he needed to know to live a life in godliness and contentment.

When it came time for Theodore to die, the abbot of the monastery received a vision from God, revealing her secret. He summoned the monks of the Enata monastery and the monks of his own monastery, told them of the vision, and uncovered her body.

They were devastated, and begged Theodora’s forgiveness with many tears. When Paphnutius heard news of the monk Theodore who had been Theodora, he came to the monastery for her funeral. After hearing everything her brother monks said of her, he became a monk himself. He stayed in her cell until the end of his days.

Her foster son became a monk as well. The stories say that, before many years passed, he become the abbot of the monastery where Theodora had been a monk.

Kontakion of Theodora of Alexandria

With fasting didst thou consume thy body utterly;
with vigilant prayer didst thou entreat thy Fashioner,
that thou shouldst receive the complete forgiveness of the sin thou hadst wrought;
which receiving in truth, thou didst mark out the path of repentance for us all.

The Emerald of God, St. Euphrosyne of Alexandria: When St. Euphrosyne’s father picked out a husband for her, she ran away and became the monk Smaragdos.

St. Susanna, Deaconess and Martyr: After St. Susanna became the Archimandrite John, she was accused of fathering a child. Like St. Theodora, she accepted the accusation and raised the child.

The Boy, A Kitchen, and His Cave: A review: This lovely picture book is an imaginative retelling of the life of St. Euphrosynos, who has the same feastday as St. Theodora of Alexandria.