Three boys in a pickling tub 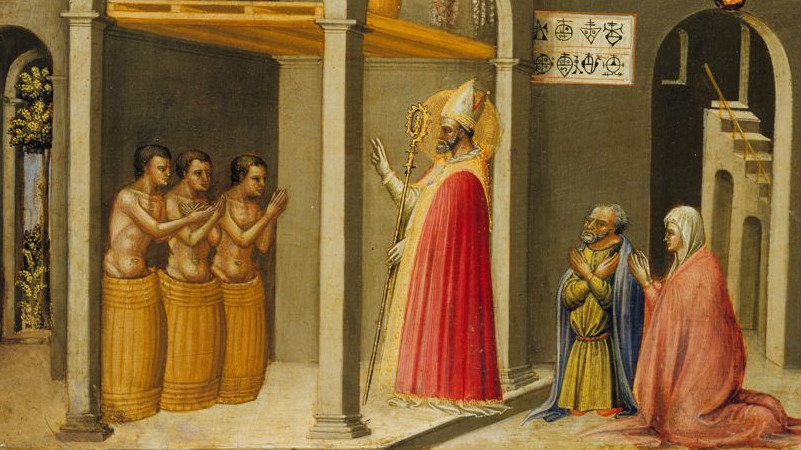 In Medieval Europe, the most common image of St. Nicholas shows him standing over three small children in a wooden tub. The image illustrates an odd story that was told and believed for centuries.

The story began as the story of the three innocent men whom St. Nicholas saved from execution. That story, which likely refers to a real event, appears in the oldest version of the Life of St. Nicholas that has come down to us.

One thing worth noting is that the Latin word that is translated as execution field in this story can refer to any place where killing or butchering regularly takes place. Another thing to note is that, at some times and in some places, it was normal to make the most important people in a work of art very large, and the less important people very small. When works made according to this convention were seen by people who were not familiar with it, those people often thought that the small people in the art work represented children.

Three students at the inn

By the thirteenth century, as the story was told and retold, the three men had become students on their way to Athens to study. There were no banks in those days, of course, no check books or credit cards. They had with them all the money they would need for the entire year. When they stopped for the night at Myra, they made the mistake of asking the innkeeper to secure their money for them while they slept. The innkeeper put their money in his strong box. And then the lust for gold fell upon him, and he crept into the room where the young men slept and murdered them.

That night, St. Nicholas dreamed of what had happened. He went to the inn, and asked the innkeeper to pray with him for the students who had died. The innkeeper fell on his knees in prayer and repentance, and at his prayer, the students were restored to life.

The three boys at the butcher shop

As time went on, the young men in the story became boys. They’d been out in the fields with their parents, who were harvesting grain, and they wandered off to explore the city. When night fell, they were quite thoroughly lost, and didn’t know how to make their way home.

They stopped at a butcher shop, and asked for a meal and shelter for the night. The butcher welcomed them in. And as soon as the door was closed, he killed them as if he were killing pigs, and packed their bodies into a pickling barrel.

Seven years later, St. Nicholas was traveling through the city. He stopped at the butcher shop, and asked for a meal and shelter for the night. The butcher welcomed him in. As soon as the door was closed, he offered him ham, and then veal. St. Nicholas refused both, and said he would take only what was packed in the barrel.

The butcher, terrified, ran away. St. Nicholas ran after him, shouting that, if he would repent, God would forgive him.

Then he went to the barrel and touched it with three fingers. The boys’ bodies became whole, and then the boys opened their eyes. They said they had been sleeping, and that they had dreamed they were in paradise.

Here are links to more stories about St. Nicholas, as I tell them: