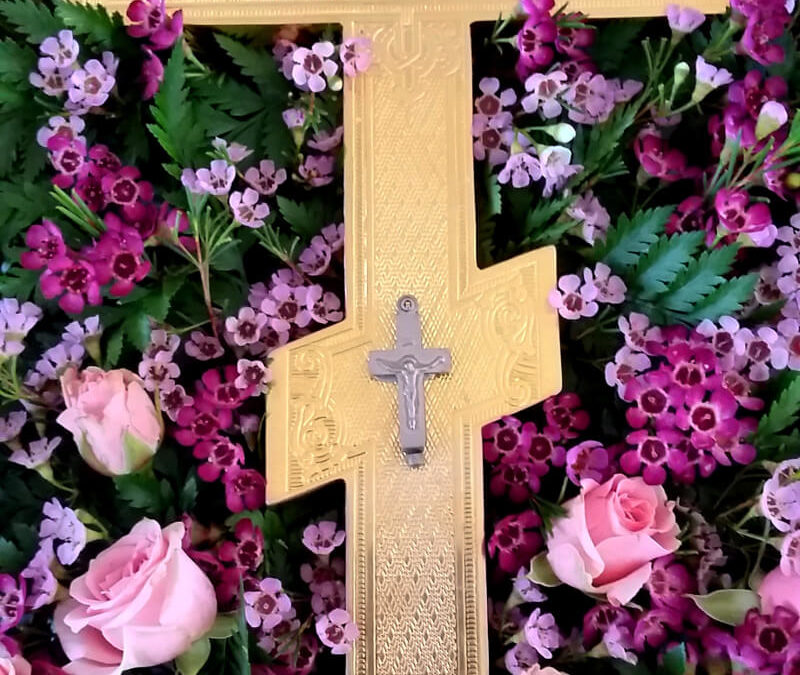 Most Orthodox Christians know at least the basic outlines of the story of St. Constantine and his mother, St. Helena. Born in the third century, St. Constantine became the emperor of Rome in the year 306. In 313, he legalized Christianity. In 325, he summoned the leaders of the Church to the first Council of Nicea. He built the Church of the Holy Sepulchre, which was consecrated in 335.

The Finding of the True Cross

Shortly after the Council of Nicea, Constantine’s mother, St. Helena, went on a pilgrimage to Jerusalem. There, during excavations made at her behest, three crosses were uncovered. Believing that these were the crosses mentioned in the Gospel, she asked the bishop, Macarius, to help determine which one had been the cross on which Jesus had died. Macarius had a woman near death brought out, and touched with the wood of each of the crosses in turn. Nothing happened when she was touched with the wood of the first cross or the second, but at the touch of the third cross, the woman recovered.

St. Helena declared that this third cross was the True Cross, the Cross on which Jesus had been crucified.

The Dispersal of the Cross

When St. Helena returned to Constantinople, she took part of the Cross with her. She left part of it in Jerusalem, in the care of the bishop, who had it encased in silver and kept at the Church of the Holy Sepulchre.

At least, most of it was. Tiny slivers of the wood were broken off of the larger pieces, encased in gold reliquaries, and worn as jewelry. Larger pieces were taken for churches and monasteries. By 348, St. Cyril of Jerusalem said that these bits of the Cross filled the entire world. He may have been speaking metaphorically, but more than a thousand years later, John Calvin said that if you gathered up all the bits of the True Cross, you’d have enough wood to fill a large ship.

Some people think that was just Calvin’s anti-Catholicism showing, and if you gathered up all the bits of wood that are thought to be relics of the True Cross, there wouldn’t be an excess of wood.

Of course, even if there wasn’t too much wood, it would be impossible to prove that any of it came from the True Cross. During the Middle Ages, every church needed relics for its altar, and every pious and faithful person wanted relics of a saint. A great market in relics grew up. True relics were given, stolen, bought, and sold. Particularly important relics – like the Cross – were broken up so that more people and more parishes could have a bit.

From time to time, it’s clear that mistakes happened. A young man who inherited his grandfather’s reliquary might remember that it contained a finger bone from St. John the Evangelist, when it was in fact the finger bone of some other St. John.

And not all of the mis-identified relics were honest mistakes. As there have been frauds and sinners from the beginning until now, fake relics were passed off as real.

The more important the relic, the more often mistakes happened, and the more often fraud happened. And what relic was more famous than the True Cross?

The Meaning of Relics

If that’s true, if it can’t be proven that all of the relics of the True Cross are in fact bits of the cross on which Christ died, then what is the use of having these relics?

The value of the Cross isn’t in miracles. No one today is going to go find a sick woman to see if the relic in the altar of a parish church will cause her to be restored to health. Even St. Helena didn’t do that, after she once determined which of the unearthed pieces of wood was the True Cross.

The Cross isn’t a talisman. Instead, like all relics, it is an intersection of the world bound by time and space and the world where time and space have no relevance. It is an object that touches both time and the time outside of time. It connects where we are, our place, our time, with the Kingdom of Heaven.

In icons, this collision of worlds is shown by a mandorla, a set of concentric rings of white light that surrounds Jesus in icons of the Transfiguration and the Annunciation and the Anastasis.

Because God chose to break the barrier between Creator and Creation by taking on material flesh, the connections between this world and the Eternal World are mostly material. It’s not that God can’t approach us through a voice or a vision. He can, and sometimes he does. But more often, because of the Incarnation, he approaches us through matter.

Bits of bone or flesh. Dust from a grave. Oil weeping from an icon. A bit of wood from the True Cross.

The parish I attend has a relic from the True Cross. When it is placed on the icon stand in the middle of the church, and I approach it, I am overcome with awe.

Here, in a tiny fragment of wood in a tiny reliquary, death and Life meet. Here, a splinter of wood becomes a singularity, encompassing all that has been, and all that is, and all that will be.

And that is true whether, historically speaking, this particular bit of wood was ever physically part of the True Cross. Because if this bit of wood is not a relic, it is an icon, an image of that which is true. Whether a relic or an icon, this bit of wood transcends time and space, and connects us, our place, our time, with the Kingdom of Heaven.