In this family, we don’t judge 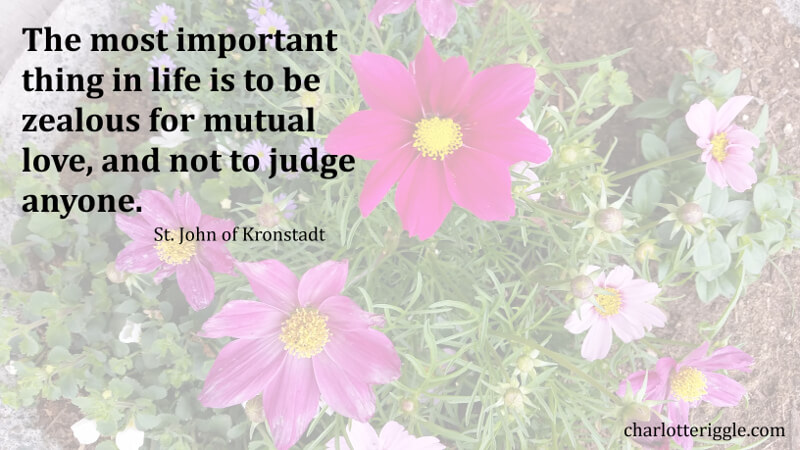 During his life, the Uncondemning Monk was a terrible, horrible, no good, very bad monk. His brother monks expected that, because of his many and grievous sins, the angels would take him from the monastery straight to Hell when he died.

But that didn’t happen. Instead, when he was dying, he told the angels, “God told us not to judge, so that we wouldn’t be judged. I have never judged anyone in my life, and I pray that God in his mercy won’t judge me.”

And that was that. God didn’t judge him. Instead, God received him with joy.

In the adult Sunday School class in a small Lutheran church, we studied Luther’s Small Catechism. In it, Luther said that the eighth commandment, Thou shalt not bear false witness against thy neighbor, means that we should fear and love God so that we not only don’t lie about our neighbor, but we defend him, think and speak well of him, and put the best possible construction on everything he does.

That took my breath away. I realized that, if fearing and loving God means not judging others, I must not fear or love God. And that’s a hard thing to accept.

So I ignored it for a while. But not for long. Because, not long after that, I became Orthodox.

As I became Orthodox, I began to read the lives and writings of the saints. The saints are incredibly important to us. They’re like our elder brothers and sisters, who show us what it means to be part of this big quirky family called the Orthodox Church.

And one of the things they show us is that, in this family, we don’t judge.

Stories from the Saints about Judgment

The lives of the saints are full of stories that teach us not to judge others.

There was the time that Moses the Black was called to judge one of his brothers at the monastery in Scetis. Abba Moses refused. But they wouldn’t leave him alone, so he finally came. But as he came, he carried a basket of sand on his shoulder. The basket had a hole in it, and he was leaving a trail of sand behind him. His brother monks asked him the meaning of it. He said, “My sins run out behind me, and I do not see them, and you’re asking me to come judge the errors of another.” And the other monks, shamed by his words, forgave their brother.

And then there’s the story of Isaac the Theban. Abba Dorotheos of Gaza was a story-teller from the desert, and told Isaac’s story like this:

For an angel brought [Isaac the Theban] the soul of someone who had fallen into sin, and said to him, ‘Here is the person you have judged. He has just died. Where do you order him to be put, into the Kingdom or into eternal punishment?’ Can you imagine a more terrible situation to be in? What else could the angel mean by these words than, ‘Since you want to be the judge of the just and the unjust, what do you command for this poor soul? Is he to be spared or to be punished?’

The holy old man, frightened beyond measure, spent the rest of his life praying with sighs and tears and continuous hard work to be forgiven this sin, and this in spite of having fallen on his knees before the angel and been forgiven, for the angel said to him, ‘You see, God has shown you how serious a thing it is to judge; you must never do it again.’ This was the way he granted forgiveness but the soul of the old man would not allow him to be completely comforted from his pain and repentance until he died.

The story is from On Refusal to Judge Our Neighbor, the most famous of St. Dorotheos’s discourses.

Quotes from the Saints on Judgment

There is also an endless supply of quotes from the saints that make it clear that we must not judge.

Give me a word

As I got to know the saints, I learned of some who would go to their abba and ask for a word. Then they would go away, sometimes for many years, while they mastered that word. And only then would they go back and ask for another word.

And I thought to myself, in Luther’s Small Catechism, God had given me a word. I needed to learn how to fear and love God in this way, no matter how many years it took. And it looks to me like it might well take me the rest of the years of my life.

But I will not give up the struggle.

And I trust the prayers of the Uncondemning Monk. As he never judged anyone in his life, I trust that he doesn’t judge me now. So I’m comfortable asking him to pray for me. I ask him to help me learn how to refuse to judge others. I want him to give me strength to succeed, and to pray for me when I fail.

St. Moses the Black: Abba Moses didn’t start out as a saint. He became a saint by the grace of God, hard work, and true repentance.

The Venerable Vitalis, Patron of Prostitutes: Vitalis left his monastery for the city, where he patronized prostitutes every night. A man defending the good name of the church murdered him.