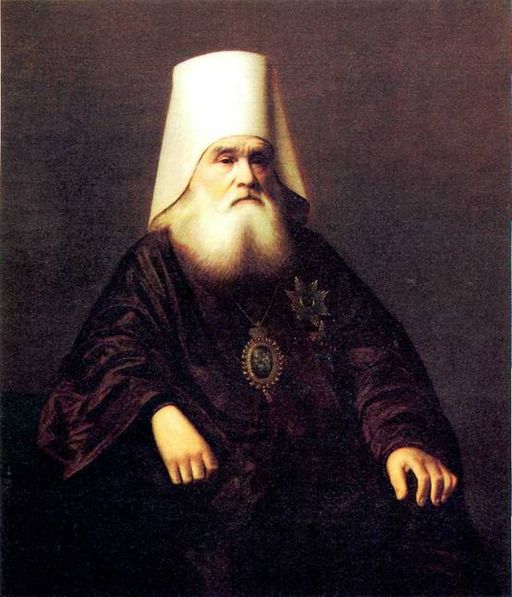 It was the winter of 1860. In the United States, Abraham Lincoln had been elected president. In the Russian far east, in the city of Nikolaevsk, a young, newly ordained priest was stranded by the onset of winter. Father Nicholas had to wait until spring before he could leave for Japan, where he was to serve the Russian consulate.

As it happened, the Archbishop Innocent, missionary to Alaska, was also spending the winter in Nikolaevsk.

The archbishop was old enough to be the young priest’s father. They spent time together that winter. Archbishop Innocent told Father Nicholas to learn the Japanese language, to translate the Scriptures into Japanese, and to expect to face trouble and disappointment. He also made a cassock for Father Nicholas, and gave him his own bronze cross.

Archbishop Innocent told him to put away his books and to learn Japanese. Serving God means serving the people that God puts in your path. All of them, not just the ones who look like you, who share your culture, who share your faith, who speak your language. It means recognizing the image of God in the person who is in front of you. It means loving God by loving them, whatever the cost, whatever the risk.

The Fruit of Repentance

Father Nicholas, of course, did what Archbishop Innocent told him to do. It took him seven years to learn the language well enough that he could preach in it. And then the first thing that happened when he started preaching was that a Shinto priest, a Samurai, came to kill him.

Well, Archbishop Innocent had told him to expect trouble. This was trouble. Father Nicholas asked the Samurai if he’d at least hear what he had to say before killing him for it. And the Samurai thought that was reasonable. He listened to Father Nicholas, and was converted, and became the first Japanese convert to the Orthodox Church.

Father Nicholas is now St. Nicholas, Equal to the Apostles and Enlightener of Japan.

And Archbishop Innocent is St. Innocent of Alaska, Equal to the Apostles and Enlightener of North America. St. Innocent has three feastdays each year. Today, the anniversary of his canonization, is one of them.

Troparion for St. Innocent of Alaska

O Holy Father Innocent
In obedience to the will of God
You accepted dangers and tribulations
Bringing many peoples to the knowledge of truth.
You showed us the way,
Now by your prayers help lead us into the Kingdom of Heaven.

The Parable of the Great Feast: After the invited guests refused to come, the master sent his servants out into the highways and hedges, to find people sheltering there, and to compel them to come to his feast.

A table where strangers are welcome: Philoxenia, the virtue of radical hospitality, requires us to welcome everyone to the table.