When Charley Met Emma: A social story about disability 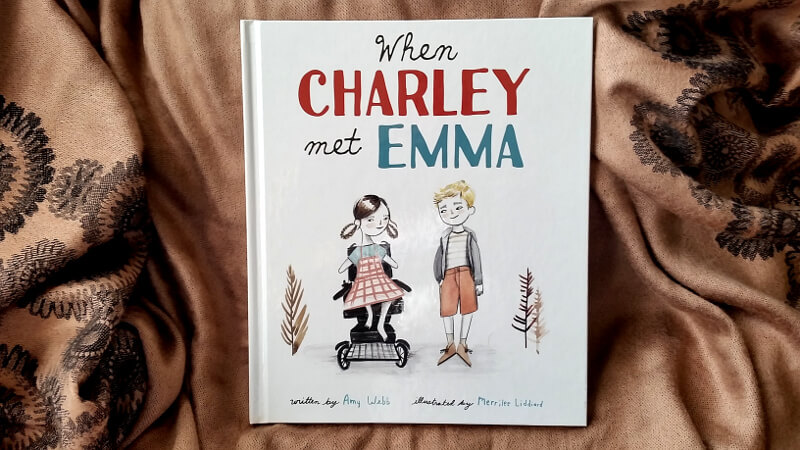 It took me a while to figure out why I like When Charley Met Emma so much. At first glance, it’s everything I don’t like in a picture book. But I love it! Seriously. It’s a delightful book.

It took me a long while to figure out why it’s so delightful. Let’s start with two things that would ordinarily move a book straight to my “nope” pile.

First, the book is didactic. It tells you what to think, what to do, and what not to do. It tells you what’s right and what’s wrong and why. And I am not a fan of didactic picture books. They strike me as disrespectful and patronizing. Just tell the story, okay? And trust the reader to figure out the right and the wrong and the why of it.

But When Charley Met Emma isn’t patronizing. It works.

Second, the illustrations by Merrilee Liddiard don’t carry any part of the story. They depict what the words say. That’s it. As a result, When Charley Met Emma isn’t really a picture book, in the full sense. It’s just an illustrated story. There’s no interplay between the text and the art. They don’t interact with each other. The illustrations don’t add anything that’s not in the text.

And I’ll be completely honest. I don’t care a lot for the style. The pictures feel slightly old-fashioned, with a muted range of colors.

A social story about disability

I finally figured out what makes When Charley Met Emma work. It’s not a regular picture book. It’s a social story, like the ones that I used to write for my kids with autism. (To be clear, I never took the training to write officially sanctioned Carol Gray Social Stories. A real Social Story has to meet specific criteria. When Charley Met Emma doesn’t meet all the criteria, and I’m sure the ones I wrote for my kids didn’t, either. But they were helpful nonetheless.)

A social story is used to teach autistic kids how to handle social situations that they’ve never encountered before, or that are uncomfortable for them. They’re used for other things, too, of course. But it’s the use for unfamiliar and uncomfortable situations that is important here. Social stories are factual, clear, and reassuring. They help the child understand how the situation might look to someone else. And they suggest a positive way to respond to the situation.

That’s exactly what When Charley Met Emma does.

When Charley Met Emma is about a little boy named Charley. He’s a pretty typical boy, but he likes having quiet time to draw more than most kids do. So he sometimes feels different. His mom reassures him that different isn’t weird, sad, bad, or strange. It’s just different. And different is OK.

Then Charley meets Emma at the playground. Emma doesn’t have any hands, and she gets around in a motorized wheelchair. Emma’s differences make Charley uncomfortable. He wonders if she’s too different to be OK. He forgets to whisper when he asks his mom why Emma looks weird. Then he feels really bad when he realizes that he made her sad.

Charley’s mom and Emma’s older sister Chloe help the children start talking to each other. They coach them on how to interact. And by the end of the day, Charley and Emma are friends.

It’s simple, but not simplistic. It works.

Even the illustrations work when you see the book as a social story. The story is meant to be reassuring. It’s meant to help a child understand something that’s hard to figure out. The clear words and calm pictures don’t add to each other. Rather, they reinforce each other. They allow a child more comfort as they work through something uncomfortable.

Why When Charley Met Emma is important

Many young children have never met a person with a significant disability, and they rarely see disabled people in picture books, either. As a result, the first time they meet someone with a disability, they are uncomfortable. They don’t know what to do. They say the wrong thing. Just like Charley in the book.

When children see people with disabilities in picture books, they are far less likely to feel uncomfortable or frightened when they meet a disabled person in real life. That’s a good thing.

Author Amy Webb also includes some helpful information from parents in the back. She is a special needs mom herself, which, I think, gives the story its power.

14 picture books with disabled characters: In this post, you’ll find several more books that include characters who use wheelchairs.