When Joseph Went Up to Bethlehem 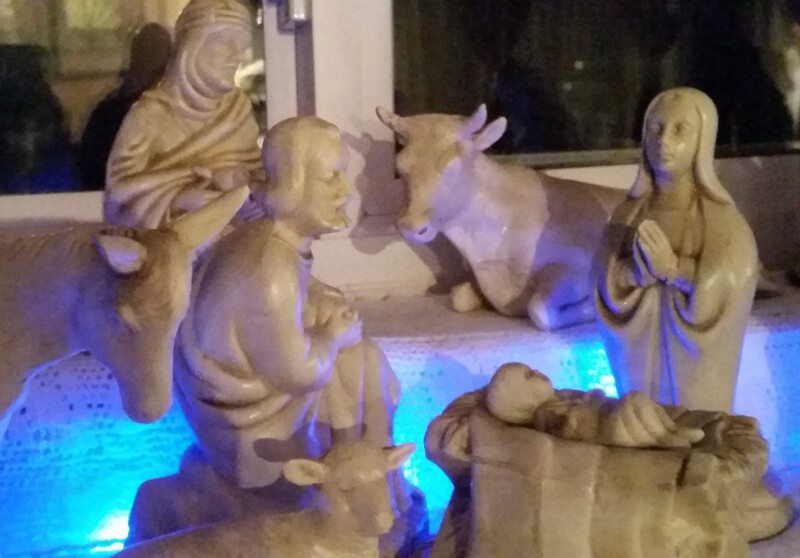 Throughout the celebration of the Nativity, Saint Joseph, the Betrothed of Mary and the Foster Father of God, seems sometimes like an afterthought. We don’t think much about him, or talk much about him. He tends to be overlooked.

In many Byzantine icons of the Nativity, St. Joseph isn’t there at all. In an icon that contains all of the traditional parts, he is there, but he isn’t worshipping at the manger. Instead, he’s sitting off to one side, by himself, struggling with his confusion and doubt.

As a friend recently pointed out to me, his struggle is put into words in the hymns at the Royal Hours for the Nativity.

Which might give a measure of comfort to others who are pious and yet still struggle.

Here are some passages from the hymns of the Royal Hours for the Nativity.

Mary was of David’s seed,
so she went with Joseph to register in Bethlehem.
She bore in her womb the Fruit not sown by man.
The time for the birth was at hand.

Joseph said to the Virgin:
“What has happened to you, O Mary?
I am troubled; what can I say to you?
Doubt clouds my mind; depart from me!
What has happened to you, O Mary?
Instead of honor, you bring me shame.
Instead of joy, you fill me with grief.
Men who praised me will blame me.
I cannot bear condemnation from every side.
I received you, a pure virgin, in the sight of the Lord.
What is that that I now see?”

Tell us, O Joseph,
why do you bring a maiden great with child to Bethlehem?
“I have searched the Prophets,” he said.
“I have been instructed by an Angel.
I am convinced that Mary will give birth to God
in a manner beyond understanding.”

When Joseph went up to Bethlehem,
his heart was filled with sadness.
But you cried out to Him, O Virgin:
“Why are you so troubled?
Why are you in misery seeing me with child?
Do you not understand at all?
I bear a fearful mystery.
Cast your fears away, and learn a strange wonder:
God, in His mercy, descends from heaven to earth.
Within my womb He has taken flesh.
When He is pleased to be born, you will see Him.
You will rejoice, and worship Him, your Creator.
The Angels ceaselessly praise Him in song,
glorifying Him with the Father and the Holy Spirit.”

The Case of the Disappearing Name Day: St. Joseph is my patron saint, so my name day falls on the Sunday after the Nativity. Except in the years when Christmas falls on a Sunday. Then my name day disappears.

Father and Son: A review: In this beautiful picture book, St. Joseph ponders what it means to become the foster father of God.