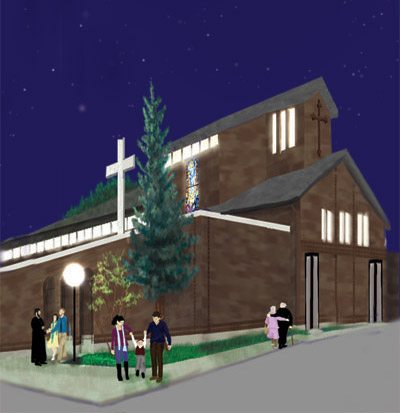 One day last week I was on Facebook, chatting with a woman who attends St. Demetrios Orthodox Church in Winnipeg. She had seen her parish in Catherine’s Pascha, and she had a question: “What made you think of St. Demetrios as one of your churches?” I couldn’t answer.

I told her that, while Becky and I had decided together to “frame” the pages of Catherine’s Pascha with churches from around the world, Becky was the illustrator. She chose the churches, and I had no idea why she included St. Demetrios. I knew that she mostly chose to use churches that were especially significant in some way, but I didn’t know what she found significant about St. Demetrios.

So I sent Becky the question, and here’s the answer she emailed back.

A Church for Every Continent

Okay, so you asked, “Why St. Demetrios?” It’s probably my favorite stories of the “why” behind the church selections, but the reason why it’s my favorite story actually extends past the publication of the book.

When the “Framing” idea for Catherine’s Pascha cemented in our brains, we chose to highlight at least one Orthodox Church per continent. Since the framing idea happened so soon after Pascha, when I was overwhelmed with learning all about Orthodoxy and Pascha traditions, sometimes, when I needed downtime away from drawing, but still needed to work, I’d research churches to include in the book.

Some were easy. Antarctica, for example; it’s not like there’s many choices to begin with. The Church of the Holy Sephulcre was a given, since the story was about celebrating Christ’s Resurrection. Type “famous Orthodox Churches” into Google, and St. Basil’s and Hagia Sophia pop up near the top.

Except for the fact that “North America” now meant “USA.” With the exception of Australia which is its own country and continent, I’d been careful to select churches that came from different countries within a continent. I wanted a Canadian Church.

So, practicing my fifth-grade Canadian geography knowledge (“Prince Edward Island, Nova Scotia, New Brunswick, Quebec, Nunavut…wait, what? There’s a new Territory in Canada? When did this happen?”) I started Googling “Orthodox Churches in …” and stumbled on OrthodoxWiki. When I got to Manitoba, St. Demetrios caught my eye. Partially because in OrthodoxWiki, it had an active link, and partially because I’d not run across that name often. The website I clicked through stopped me.

First was the beautifully lit photos of the stunning icons and the iconostasis. After looking at dozens of churches all day and hundreds over the weeks, that’s saying something! But on the homepage was something that screamed “listen to me!” It was a podcast by Father Ted (whose last name I had no idea how to pronounce!) called “Orthodoxy for Protestants.” Perfect introduction to someone like me, a Protestant trying to enter this somewhat alien looking world of Orthodoxy. I loved it. Fr. Ted was funny, interesting, and helped me understand some of these traditions I’d stepped into and was trying to interpret. Besides, he was talking to the Canadian Mennonite Seminary, and my home church is a former Mennonite church, so that was fun.

In the end, that week, I got overwhelmed at trying to choose a Canadian church, and put the list away to work on other spreads. But I kept coming back to St. Demetrios for that podcast over and over as I worked on other pages.

The book was mostly planned out by the time I had to make a decision about the Canadian church. I couldn’t find my short list, and didn’t want to start over looking. I was fairly well burned out when it came to looking for churches to include. I thought to myself, “What’s the story behind St. Demetrios?”

And like most Orthodox Churches with websites in North America, they have a link to their parish history. Theirs was in timeline form.

And I read the same story re-told.

I’d read many, many parish histories over the course of the months. While the North American choices in the USA had been settled early, that didn’t mean I hadn’t researched other options, including your church, St. John’s in Memphis, and the one at which I’d attended Pascha (and had my wedding reception at years earlier!) among a few dozen others. Many, many times, I’d read the story about immigrants coming to the Americas, and eventually gathering a church community around them to keep their Orthodox traditions alive. Over time, the communities grew, until a permanent purpose-built church could be erected.

In the timeline of St. Demetrios, I read again about immigrants gathering together, first meeting in each others’ homes, then purchasing a home to use as a church, and finally building a dedicated site, but only after they’d been worshipping together for years. In addition to worshipping together, they’d formed community groups, relief organizations, children’s classes and activities. This appeared to be a vibrant community. Non-Greek names in the roster of people serving in leadership positions also hinted that there were people who’d converted to Orthodoxy from the local community, which mean the church was likely working in the larger Winnipeg community, rather than being insular.

So many churches in Catherine’s Pascha I had been able to find because they were recognizable, historically significant, architecturally significant and such. Where I could, I chose active churches with living congregations. (Obviously, this was impossible in places: Hagia Sophia for example, church-turned-mosque-turned-museum, is not permitted a congregation, which is why she’s depicted with her congregation in the 500’s. St. Basil’s is now a museum, though services have once again been performed there. Holy Trinity in Antarctica is one of the active churches, but it relies on the population of the attached research station, which rotates personnel).

One place Protestants like me and Orthodox can agree is Christ’s Church is her people, not the collection of buildings. So when I had set out to settle the “Canada Church” question, I was looking for a church with an active congregation. This doesn’t mean the historical, architectural churches don’t have living congregations, many do, but I wanted a representation of a working church, one that doesn’t have a claim-to-fame that would bring lots of outsiders to admire the building, rather than connect with the people.

And here was one. One I felt I sort-of knew, thanks to Fr. Ted (I’d listened to more of his iSermon podcasts by then). And St. Demetrios could stand, in a way, for the thousands of parishes all over the world, where groups of Orthodox had gathered, grown, and eventually planted a physical building to support the already active church working and serving their various communities. It also reflected the early church, gathering in believers’ homes, before they could transform a structure to a dedicated building to serve the church.

Even more fun, since the blank spot the Canadian church was to go in was in a “going home” spread, I could insert Fr. Ted himself, in an homage to the podcasts I’d listened to. This makes Fr. Ted one of five historical named people in the frames. (Three are dead and sainted, two, including Fr. Ted, are alive and working…I wish I could claim I planned this all, but I seriously think God was having fun with me! Little did I know the joke was just starting…)

So St. Demetrios was chosen. Now came the hard part—finding good reference photos of the exterior! Let’s just say, Google Earth Street View became my best friend at this point. And I took artistic license too… for some reason, no one parked anywhere near the church in my drawing. (The other parishioners, by the way, are not based on any one particular person).

Catherine’s Pascha launched in February 2015, and I loved the St. Demetrios spread, because in it, I saw a church, even like my own. There’s nothing special enough about the exterior perhaps to attract much attention from the outside, but if you go inside, you would find a group of people who love God and are working to grow closer to Him by supporting one another and reaching out to the community they are in.

Then the funny parts happened, which is why this story becomes my favorite one.

What My Big Fat Greek Wedding Has to Do with It

When we first started establishing Catherine’s family and background, you told me that Catherine’s mother is Greek, or at least half Greek. (rather than the short-cropped red-head she’d started as). So, I got to watch My Big Fat Greek Wedding for research. At least, I told my husband that.

“Look honey, it’s a Greek family, and they’re Orthodox. Of course I’m doing this for work. Yes, the last dozen times this month were research for work too…yes, I’m counting My Life in Ruins as research. There’s at least one Orthodox church in it, and Greece epitomizes the culture around the Greek Orthodox Church, right?”

Whether he bought that line or not, that was my story, I’m sticking to it.

Nia Vardalos is probably among the most well-known Greeks in the world now, and while I didn’t intend for Catherine’s mom to look like her, apparently, MBFGW affected me more than I thought (though I’ll admit the hair of Catherine’s mom was largely based on Vardalos’s hair in My Life in Ruins. Doing so gave me lots of reference photos when the hair was being titchy. And gave me another excuse to watch a movie…) You’ve said Catherine’s mom looks like her, my mom has said it, so there you have it. Vardalos’s performances probably influenced me greatly. And I love her movies, so I hope that’s okay with her—I needed Greek reference photos, and if you Google “Greek Mom” any more, you’ll find her photo! Google “Greek Woman,” same result.

My mom and I were ecstatic to hear about MBFGW II coming out (as were a large number of my friends), and filming happened after Catherine’s Pascha was released.

So, having survived the launch of Catherine’s Pascha and the first Pascha season half living at the post office, half packing and ordering another print run of Catherine’s Pascha, I was indulging in wasting time on my computer, rather than taking orders. Scrolling through my Facebook feed one day last summer, I happened on a photo in my feed. I no longer remember who posted it:

Fr Ted was on the set of MBFGW II, blessing the production! Having tried to draw him, I knew his face well. I was pleasantly shocked. That was really cool!

It’s a Small World After All

And suddenly, a few clues dropped into place.

MBFGW takes place in Chicago, but then I remembered, Vardalos is Canadian by birth.

Where in Canada had she been born?

IMDB is made for this.

When you told me the Orthodox World was S-M-A-L-L, I had no idea. Out of all the Orthodox churches in Canada…and to be connected to a separate (I’d thought!) resource I’d used for the design of Catherine’s family…God has a wonderful sense of humor!

So there you go–that’s why St. Demetrios, and that’s why that story is my favorite.

The Creation of Catherine’s Family: How R.J. Hughes found Catherine’s family, and what My Big Fat Greek Wedding has to do with it.

St. Mark’s Day: Winged Lions and Roses: A little girl wanted to know the names of Catherine’s mommy and daddy. She didn’t understand why I didn’t answer when she called me from her toy phone.