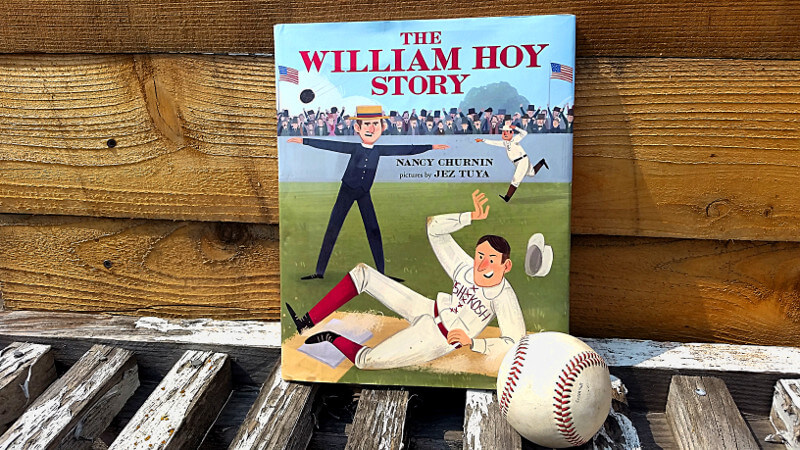 It had never occurred to me to wonder why umpires use hand signals to make calls in baseball games. Of course they’re important. How else can the people in the stands, and the players in the outfield, know what the calls are? It seems like they must have always been part of the game. But they weren’t. Someone had to introduce them. And that someone, according to The William Hoy Story, was William Hoy.

Like a lot of boys, William Hoy loved baseball. He knew he’d have to work hard if he was going to have a chance to play. He was short, after all. And he was deaf.

So he practiced. A lot. He learned all the skills a major league baseball player needed. But you don’t get into the major leagues by throwing a ball against the barn, or by running by yourself to increase your speed and stamina. You need to play on a team.

Hoy’s high school team wouldn’t have him because he was so short. He grew up and opened a cobbler shop, where he made a living fixing shoes. But he still loved baseball. And one day, while he was watching some men playing baseball nearby, a foul ball came his way. He scooped it up and threw it to the player. The player invited Hoy to be on their team.

Hoy was delighted. And it wasn’t long before he was playing on a professional team.

He could run and catch and hit and throw with the best of the players. But he couldn’t hear the umpires. And that was a problem. There was one particularly humiliating incident, when he thought he’d let three balls go past, and it was really three strikes. Everyone laughed at him.

And he realized that, if the umpires would use hand signals, he wouldn’t make that mistake again. He left the dugout to talk to the umpires. The umpires were willing to give it a try. And in that way, according to the story, Hoy transformed the game for everyone.

History and biography are relatively new topics for picture books. Authors and illustrators and publishers and librarians are still struggling to decide when a picture book biography is a work of nonfiction and when it’s fictional account based on the life of a real person.

If you’re interested in the discussion, you can start with Elizabeth Bird’s thoughts on invented dialogue and on accuracy in illustrations.

I’m not sure how I’d classify The William Hoy Story. I think I’d consider it a fictional account based on the life of a real person. As far as I can tell, the “big picture” is reasonably accurate. Hoy was a deaf man who played professional baseball in the late 1800s. But, again as far as I can tell, none of the events in the book really happened. And the most important event in the book, where Hoy was first humiliated, and then persuaded the umpires to use hand signals, almost certainly didn’t happen. You can read the historical consensus in the entry about Hoy on Wikipedia.

You’ll notice that the Wikipedia article is about Dummy Hoy. That’s because William Hoy went by the name Dummy. (Dumb, at the time, meant mute, not stupid.) It’s not just that other people called him that. That’s how he referred to himself. And when people called him William, he’d tell them to call him Dummy.

That was acceptable in the late 1800s and early 1900s. It isn’t now. So what is an author to do? Having people call Hoy “Dummy” in a picture book seems like a bad idea, even if they would have called him that in real life. The idea that it was okay then, and it isn’t okay now, might be too complex to convey in a book without derailing the story.

Churnin sidesteps the issue in the story, calling Hoy by his given name, William, throughout. She does mention his nickname in her notes at the end of the book, though. That gives parents and teachers the information they need to talk about it with the children they read the book with, if they choose to do so. It seems like a fair way to deal with the problem.

Why I love this book

Even though The William Hoy Story is not wholly accurate, I still love it. The story is engaging, Hoy is charming, and the illustrations by Jez Tuya are delightful.

And, of course, I love it because the main character is a person who has a disability. There aren’t enough picture books about people with disabilities.

That’s an idea that isn’t intuitive. And this book makes the idea clear and memorable.

So whether Hoy was the one who introduced hand signals to baseball, or whether it was another deaf player, hand signals are an important part of the game. They make the game accessible for deaf players. And they make it better for everyone who watches the game as well.

When you read this book with your kids, you can let them know that it’s historical fiction. It’s based on a real person’s life. But it’s not history. And that’s okay – some of my favorite books are historical fiction. (Does anyone else love Sharon Kay Penman?) Just make sure your children understand that this is a story about how we may have gotten hand signals in baseball, not the story.

Dad, Jackie, and Me: More than a baseball story: A story about a deaf father, his hearing son, and Jackie Robinson.

Baseball Saved Us: A Review: The Japanese internment camps weren’t much like summer camp. But there was baseball.

The Bat Boy and His Violin: A Review: A young Black boy wants to be a violinist. His father manages a team in the Negro League, a year after Jackie Robinson breaks the color barrier. And he wants his son to want to play baseball.