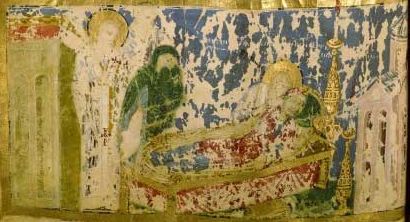 St. Gorgonia isn’t officially called “the Audacious.” But she was audacious.

The Family of St. Gorgonia

Gorgonia’s parents, Gregory and Nonna, were both saints. So was her brother. We know him as St. Gregory the Theologian. She probably thought of him as her whiny little brother.

And it’s not likely that her brother thought of her as a saint. Not at first, anyway. Because she got married and had children. Three daughters, and some number of sons. At that time, married women with children weren’t generally thought of as candidates for sainthood.

But, even as a married woman, Gorgonia was known for her piety and for her generosity. She gave alms freely, and her home was always open to anyone who needed shelter. And when she died, her brother gave a funeral oration that cemented her reputation as a model for married women who desire holiness.

All that we know of her life comes from this funeral oration. Although it’s all very complimentary, it contains only two passages that are good stories. These stories tell of times when she should have died, but didn’t. These stories, rather than her almsgiving and hospitality, are what people remember about her.

In the first story, Gorgonia was in a carriage that was being pulled by a team of mules. Something caused the mules to bolt. The carriage was overturned, and she was dragged and trampled. As a result of this accident, she suffered grievous injuries, and her pagan neighbors thought she was being punished. But she refused to be examined or treated by the doctors. In the first place, because of her modesty, she found the idea of being examined by the doctors intolerable. But even more, since God had allowed this calamity to befall her, she wanted God to restore her. And he did.

In the second story, Gorgonia came down with a terrible illness. She suffered from headaches and fevers, with intermittent paralysis and coma. This time, she had been treated by doctors, and prayed for with tears by her parents, and by her whole community. None of it seemed to do any good. Her illness continued.

One night, though, the symptoms abated somewhat. So she took herself to Church, and as the woman with the issue of blood had approached Christ, she approached the altar. Laying her head on it, she cried. She cried until there was a puddle of her tears on the altar. Then she mixed her tears with the elements of the Eucharist that were reserved on the altar, and anointed her entire body with this mixture. And as she had been healed before, she was healed again.

If you’re Orthodox, or familiar with Orthodox piety, that story isn’t just breathtaking. It’s shocking. Her brother was understating the matter when he called it “an act of pious and splendid effrontery.”

In the first place, not just anybody is allowed to approach the altar. You don’t even go near it unless you have official business doing so. The clergy serve at the altar during divine services. But even they wouldn’t use it as a place to cry. It’s just not that sort of place.

And the bread and wine reserved on the altar are the Body and Blood of God. They are consumed by the faithful during the Divine Liturgy. But they are never, ever, ever used to anoint anyone for anything. Never. We have oil for anointing. We don’t mess around with the Body and Blood.

And yet Gorgonia did.

What was she thinking? I don’t know. But I do know that God didn’t rebuke her for not following the rules. He understood what she needed. He knew what she was asking him to do. And He did it for her.

St. Brigid’s Cloak and Blueberry Jam: How St. Brigid persuaded the king of Leinster to support her monastery and to serve the poor.