After the Fall: A Book about Healing from Fear 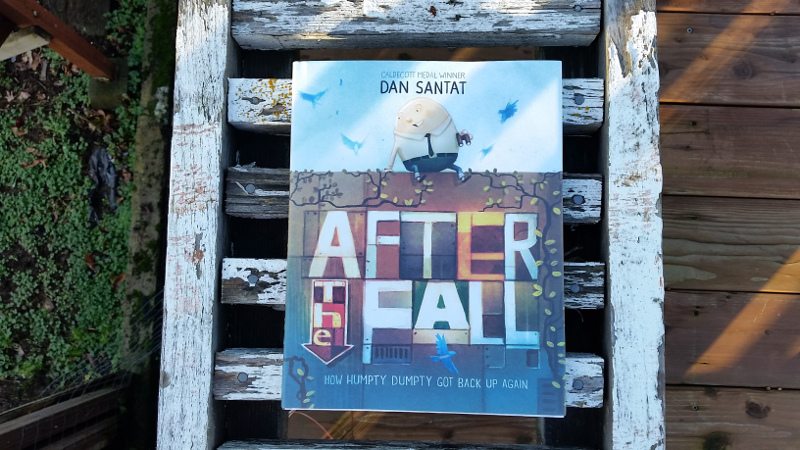 After the Fall, the newest picture book by Caldecott medalist Dan Santat, is not just for kids. I know I say that about a lot of books. I truly believe that a picture book is a work of visual and literary art. The best of them are beautiful, rich, and deep. Of course children can enjoy them — children can enjoy Beethoven, too. But that doesn’t mean grownups should avoid Beethoven. Beauty is for everyone.

And while it is a picture book, and an epilogue to a nursery rhyme, Santat wrote it for adults. Or, rather, he wrote it for one specific adult. He wrote it as a love letter to his wife.

After the Fall is the story of what comes after Humpty Dumpty’s great fall. The nursery rhyme tells us that all the king’s horses and all the king’s men couldn’t put Humpty together again.

Humpty clarifies that for us. The men at King’s County Hospital did, in fact, put him back together. Mostly. But, Humpty tells us, “there were some parts that couldn’t be healed with bandages and glue.”

The part of Humpty that loved being up high among the birds was shattered. Not the love. The love was still there. But after the accident, Humpty was afraid. And that fear separated him from everything he loved. The birds, of course. But it affected his relationship with everything in his life. Even his bed and his breakfast cereal.

Eventually, he took up bird-watching again. But not from atop the wall. He watched with his feet safely on the ground. It wasn’t the same. But it was the best he could do.

I love Humpty’s plain, matter-of-fact voice as he explains what happened to him. And I love the fact that there is nowhere in the story any blame for his fear. There is no shame. Accidents happen. It’s not your fault.

I also just adore the way that Humpty’s love for birds pulls him, little by little, out of the fear. St. John the Beloved told us that there is no fear in love, that perfect love casts out fear. And Humpty’s love helps him see the next step, and gives him the courage to take it. Bird-watching from the ground. Then joining the birds virtually, using a paper airplane.

Until the end … I’m not going to tell you what happens at the end. Usually, I don’t care about spoilers. I mean, I read Shakespeare, right? And I know how those stories end. And usually, I feel obliged to tell you how the books I review end, because you might want to know that before you get the book for your child. But with After the Fall, I want you to experience the end of the story with Humpty. It’s not like you won’t enjoy the book as much once you know how it ends. There is so much in this story to love, and as much as the ending is a surprise, it gets richer and deeper every time you read the book. You’ll love it more every time you read it. I certainly have!

But the ending of this story is so masaterful, and so compelling. You come to what would have been the ending, had any lesser writer created it. And then Santat keeps going. The end ing becomes a new beginning for Humpty. And you deserve to experience the ending, and the beginning, the way Santat wrote it, without any interference from me.

Oh, the art! Santat won the Caldecott Medal for his previous book, The Adventures of Beekle: The Unimaginary Friend, so you know he’s a fabulous illustrator. And when you see the cover of After the Fall, you’ know it’s going to be special. The publisher pulled out all the stops. Even the dust jacket is gorgeous! The title is embossed. There’s spot varnish, which catches your eye and draws you to the most important elements. And under the dust jacket (which shows Humpty sitting high atop his wall), there’s a second cover design showing Humpty falling. The whole package is just gorgeous.

Of course, the art in a picture book ought to be more than gorgeous. It ought to help tell the story. It ought to say things about the character and the plot that you wouldn’t know from the words alone.

And the illustrations, with their subtle use of color, and their imaginative use of perspective, let you feel what Humpty feels. The isolation, the sparation, the fear, the longing, are all there, in the pictures. And all those feelings lead you to Humpty’s glorious triumph at the end of the book. If it doesn’t make you cry with joy, you’re made of sterner stuff than I am.

Picture Books Are for Grownups, Too: Eight reasons that grownups should read picture books.

It Could Have Been Worse: A Review: A little mouse is having a bad day. He doesn’t see that it could have been worse — but the reader sees all the dangers. It’s a sweet story, and lots of fun.