All the Way to the Top: A story of the Capitol Crawl 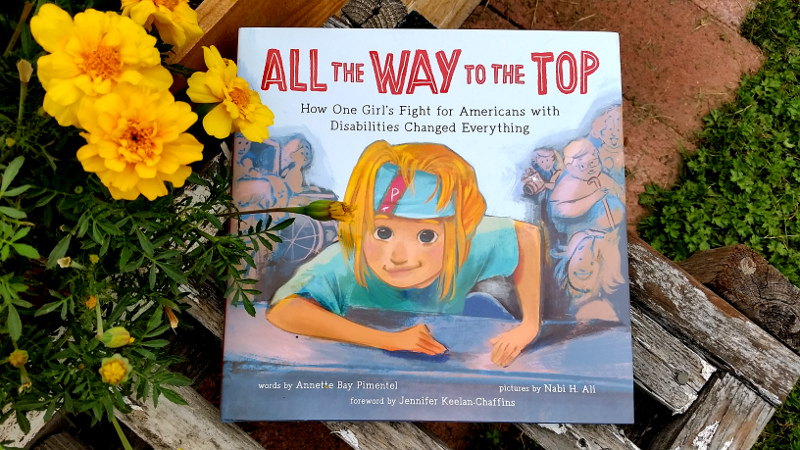 I have two things to say about All the Way to the Top. First, this book is important, and every child should have a chance to read it. If you have a picture book shelf, this book should have a place on it. There really isn’t another book like it.

Second, All the Way to the Top is not nearly as good as I wanted it to be. I wanted a picture book that was just as powerful as the true story that it tells. And Jennifer Keelan-Chaffins’ story is so powerful that maybe that was too much to ask. The faults are more quibbles than serious flaws. We’ll talk about them later.

First, let’s talk about the story.

The story of Jennifer Keelan and the Capitol Crawl

All the Way to the Top is the true story of Jennifer Keelan’s participation in the Capitol Crawl.

Jennifer had been participating in protests since she was 6 years old. When it was time for her to start kindergarten, she couldn’t. She had cerebral palsy and used a wheelchair, and she wasn’t welcome. Her mom finally found her a school that would allow her to attend for a little while in the afternoon. But Jennifer knew that wasn’t right. She wanted to go to school, just like everyone else.

Her parents got in touch with a group of activists who were working to ensure that people with disabilities had access to public places like schools. They got involved with the activist group, and Jennifer became an activist herself. She and her family joined protests around the country. She and her mom were even arrested at a protest in Montreal when she was 7 years old! (The story of the arrest isn’t in the book. Watch this video to hear Jennifer tell the story of her arrest.)

The Capitol Crawl and the Americans with Disabilities Act

In 1989, disability rights activists proposed a new law, the Americans with Disabilities Act. But Congress wasn’t interested in passing it. They thought it would be too complicated and too expensive. So the disability community planned a major protest in Washington DC in March of 1990.

At that time, if you were in a wheelchair, you couldn’t get to the Capitol building. The plan (which was not publicized in advance) was for people who couldn’t climb the steps that blocked their access to crawl up the steps. Jennifer wanted to join them. Many of the adult activists didn’t want her to. They were concerned that her presence would cause all of the disabled people to be treated as children.

But she wanted to, and at least one of the protest leaders supported her. So she did it.

And, of course, Jennifer became the center of media attention at the Crawl. She was an adorable little blond girl, extremely photogenic. Her presence got more coverage for the Capitol Crawl than it would have otherwise gotten. And before the end of July, the Americans with Disabilities Act had been signed into law.

So what’s wrong with All the Way to the Top?

I’ve really got just three quibbles, along with one objection.

Let’s start with the quibbles. All the Way to the Top is a bit too wordy. I don’t object to picture books with a lot of words – in fact, my favorite ones tend to be longer. But every word in a picture book should be there for a reason. You need to cut out every single word that isn’t essential to the story.

You also have to watch sentence length and complexity in picture books. The language needs to be straightforward and direct. If you load up too many sentences with prepositional phrases and subordinate clauses, you risk losing young readers.

All the Way to the Top would have been a better, stronger story if Annette Bay Pimentel had had an editor who treated the story as a diamond in the rough. By cutting away every unnecessary word, shaving away every needlessly complex sentence, the power and beauty of the story would shine through more brightly.

The other two quibbles are in the illustrations. The smaller quibble is the end of the story, when Jennifer is going back to school. There are ramps, wheelchair entrances, and braille on signs. And one of Jennifer’s fellow students is a Black girl with dark glasses, a white cane, and a guide dog.

That picture bothers me, because it’s really, really unusual for someone to walk with a white cane and a guide dog at the same time. Many people who use guide dogs also use white canes; you can’t get a guide dog if you’re not good with a cane. Usually, though, if they’re using a guide dog, if they have a cane with them, it will be folded up and tucked in their purse or backpack. They’d get it out if the dog stops at an obstruction, to help them figure out what’s going on.

The larger quibble is that the pictures of the protests that Jennifer and her family attend are dark, gray, and somber. The people, other than Jennifer, are indistinct. Jennifer herself (and her sister) are sharp, clear, and brightly colored. I think Ali’s intent was to make Jennifer and her “pop” out of the crowd.

But this approach does two things. First, it makes the protests look sinister and maybe a little scary. And, second, it isolates Jennifer from the rest of the protesters. She’s different from them. And she shouldn’t be. She was part of the group.

The people united will never be defeated

And that leads me to my one objection. The subtitle of All the Way to the Top is “How One Girl’s Fight for Americans with Disabilities Changed Everything.” And the fight for disability rights, the fight for the ADA, the Capitol Crawl, was not one girl’s fight. It was a fight of “the people united.” It was a fight that had started before she was born, and that still continues. She was part of it then, and she is part of it now. And her part is important.

But the others that fought before her and with her shouldn’t be erased from the story. She was, and is, part of a fight. And the fight isn’t over yet. Because, as any disability rights activist will tell you, while the ADA laid a good foundation, it didn’t change everything. There is still a lot of work to be done.

To be fair, that point is included in the notes for grownups at the end of the book. But I wish it had been incorporated into the story.

Please get All the Way to the Top

I spent way more time on my quibbles than on the story. But that’s because I had such high expectations for this book! Picture books that include characters with disabilities are rare enough. A book that tells an important story from the disability rights movement is a treasure.

The Capitol Crawl was an important event. All the Way to the Top is an important book. It’s a great story. And children will relate to Jennifer’s feelings of frustration, of unfairness, and, at the end, of victory.

All the Way to the Top isn’t perfect. But, in the end, that doesn’t matter. Get it, and read it with the little ones you love.

Can service dogs go to church? Because churches are exempt from the Americans with Disabilities Act, the answer to this question is, “Sometimes.”

Just Ask! A picture book by Sonia Sotomayor: This delightful picture book briefly introduces children to a range of disabilities.