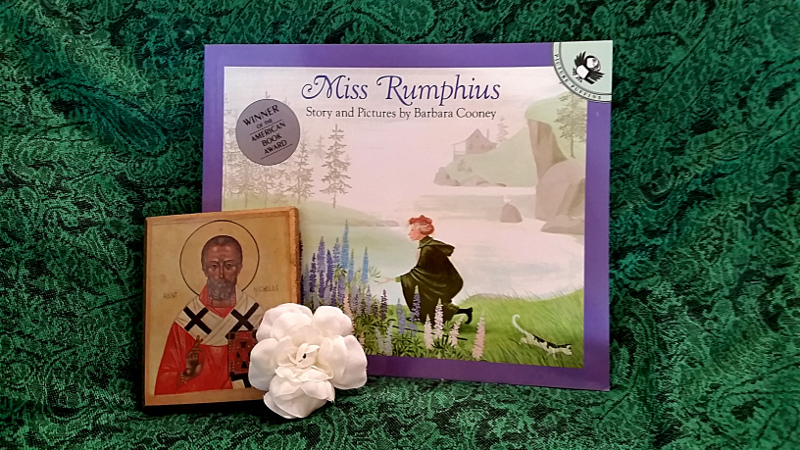 I didn’t read Miss Rumphius when I was young, of course. It came out in 1982, when I was already an adult, but didn’t yet have children. And so the book escaped my notice for many years.

And when I first read it, standing in a bookstore, I thought it was sweet and beautiful. At the time, though, I didn’t have anyone the right age to read it with or give it to, and so I left it on the shelf at the store.

Recently, I stumbled on the fact that Barbara Cooney dedicated Miss Rumphius “To Saint Nicholas, patron saint of children, sailors, and maidens.” And then, of course, I had to have it. 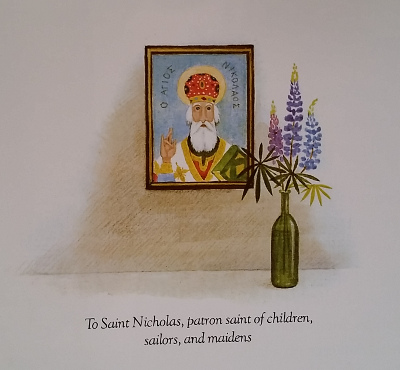 And I discovered that Miss Rumphius is a thing of wonder.

A story that goes full circle

The story in Miss Rumphius starts when Alice Rumphius was a little girl. It ends when she is very old, speaking to her great niece, who is also named Alice.

When the elder Alice was a little girl, she lived in a port city, where the harbor was filled with sailing ships. It was, perhaps, a little before the year 1870. Alice’s grandfather was an immigrant. He was an artist and a woodcarver, and he doted on his granddaughter. She sometimes helped him in his shop. In the evenings, she would sit on his lap, listening to his stories of faraway places.

Alice grew up, but she did not get married. Instead, she moved far away and worked as a librarian. A winter visit to a conservatory reminded her of a tropical island. And so she began traveling to faraway places, starting with a tropical island. From there, she traveled the world. She even went to Australia! And when she was in the Land of the Lotus Eaters (which was, perhaps, on the northern coast of Africa), she injured her back. She decided it was time to find her house beside the sea.

Miss Rumphius gets settled in her new home. She puts in a small garden, plants some flowers, and then her injured back flares up. She spends most of the next year in bed. The story doesn’t say how she managed to get through that year. Who shopped and cooked? Who did her laundry? Who cleaned her house?

She was a Victorian woman of means, so she must have had household staff. But they are not part of the story. And a child won’t notice their absence. But I did. It’s hard, today, for a person recovering from a serious injury to manage, with microwaves and washing machines and grocery delivery. Miss Rumphius wouldn’t have had any of that. So she had to have had help.

In the spring, as she’s able to walk again, she discovers a patch of lupines that seems to have spread from her garden. And with that, she knows how to keep the third part of her promise to her grandfather. She will make the world more beautiful by planting lupines everywhere!

When Alice was a librarian, she was called Miss Rumphius. And Miss Rumphius, when she began planting lupines everywhere, was called The Crazy Old Lady. And, over time, as the Crazy Old Lady grew older still, and her flowers filled the land, she was called the Lupine Lady. The children in her village think she’s the oldest woman in the world. And little Alice, her grand-niece, wants to live as her great-aunt had lived. She wants to grow up, and go to far-away places, and then come home to live by the sea. And her aunt tells her that she must also do something to make the world more beautiful.

And this book, I think, makes the world more beautiful.

The art in Miss Rumphius is glorious. Barbara Cooney was from New England, and her artwork reminds me very much of the art of another famous New Englander, Grandma Moses. While Grandma Moses never trained in art, Cooney took art classes and was a professional illustrator.

But the style of their work has much in common. And if I knew more about art, and had the vocabulary to describe it, I would. But use Google to open a gallery of Grandma Moses’s work, and compare it to the illustrations in Miss Rumphius. It would be a lovely way to spend an hour or two.

Things to look for in the illustrations

Your older children might be interested in using the details in the illustrations to date the events in the story. There are sailing ships in the harbor, and there is a steam-powered ferry. There is a narrow window in time where both would have been there at the same time. The types of lights Miss Rumphius and her grandfather use in their homes, the clothes people wear, the horse-drawn wagon in one picture and the automobile in another: you can follow all of these things and figure out when the various parts of the story must be happening.

Younger children might enjoy looking for animals in the illustrations. A little girl in the library where Miss Rumphius works has brought her pug with her. There are taxidermied birds by the card catalog.

And Miss Rumphius always seems to have had cats. A calico napped on a footstool by the fireplace in her grandfather’s parlor. A black and white cat follows her around at her home beside the sea. A cat chases a mouse into a burrow outside. There are cats in the living room when her great-niece visits.

In Miss Rumphius’s living room, your little one might notice the paintings on the wall and the wicker chair. Those very same paintings, that very same chair were in Alice’s grandfather’s parlor. And the little table in the parlor shows up in another scene set in the house by the sea.

More to know about Miss Rumphius

In 2017, The Atlantic published a long essay about Barbara Cooney, with more about her life, her art, and her books. It’s well worth reading.

While Miss Rumphius is a fictional character, she is loosely based on a real person, Hilda Edwards Hamlin. Hamlin immigrated to the US from England in 1904. In the 1920s, she began strewing lupine seeds around Christmas Cove, Maine, where she spent the summers. You can learn more about Hamlin, the original Lupine Lady, from the New England Historical Society.

Things to talk about with your older kids

There are some details in Miss Rumphius that your older children might notice, and you might want to be prepared to discuss.

Miss Rumphius’s grandfather carves figureheads for sailing ships, and wooden Indians for cigar stores. Because Native Americans had introduced tobacco to Europeans, the use of their images on signage and in advertising had been common for a hundred years or more before the story was set. Today, though, many Native Americans consider them offensive. Debbie Reese, who writes about the representation of Native Americans in children’s literature, explains her objections. Your older kids may need you to explain the history of cigar store Indians, and why people as lovely as Miss Rumphius and her grandfather would have made them.

At the end of the book, in Miss Rumphius’s living room, the older kids may notice the stylized figurine depicting an African “native” on her mantel, along with the seashells and coral. That would undoubtedly be a memento from her travels. For a Victorian adventurer traveling the world, such figurines would have been no more controversial than the seashells. But it’s a different time, and the changes are worth talking about.

Another change to talk about is how unusual it would have been for a woman of Miss Rumphius’s time to live as Miss Rumphius lived. Women were expected to get married, have children, and manage the domestic sphere. And when a Victorian woman married, everything she owned (other than land) became her husband’s property. Miss Rumphius was clearly a woman of considerable means. It was only by staying single that she retained control of her wealth, and thus the ability to live her life on her own terms.

Book activities not to undertake

If you’re not in an area where lupines are native, don’t plant them! They are beautiful, but they outcompete native plants and decrease biodiversity where they are introduced. David Heard, a scientist, explains the problem with lupines – and also speculates about where the name Rumphius may have come from.

If you want to make the world more beautiful by planting flowers, find flowers that are native to your area, and plant those.