Why I find the Sunday of the Paralytic disheartening 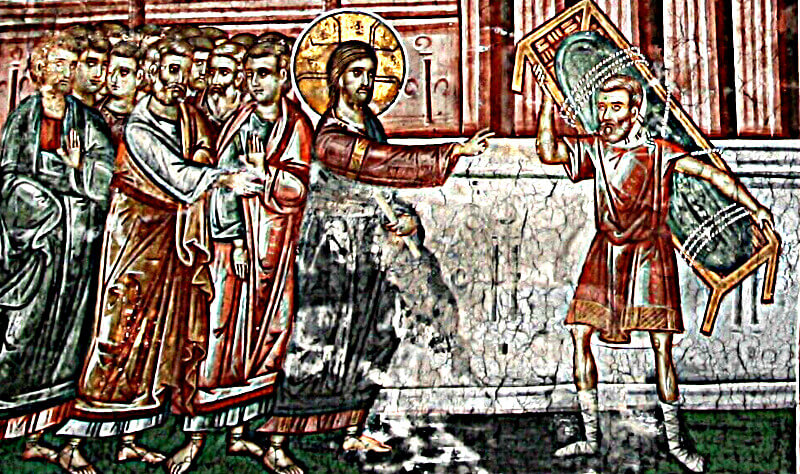 The Sunday of the Paralytic is just behind us – it is in fact a week later – and I’ve had the week to discover that it made me upset again, and why.

Everyone needs healing and just because we’re physically healthy doesn’t mean we can’t be way off base spiritually. Obviously, not everyone is sick or disabled, so the leap has to be made from physical healing to spiritual healing. Fair enough, right? Or is it?

Where it gets dangerous, and a point that I’ve not yet managed to get across, is in three things:

Why is the way we have spoken about healing all these centuries problematic? It is, after all, probably true.

Actually, we do not know that it is true.

The first point of danger is this: The frequent mention that this change was difficult for that person and something about which they might have had mixed feelings.

That being healed of a disability brought about a change in the lives of these people is obvious and, well, really, kind of the point of healing them in the first place.

We humans frequently find change difficult. There is no denying that, but it doesn’t follow that this is necessarily true for the people that Christ heals of a physical disability. Disability comes with a lifetime of disadvantages and prejudice. There are no real ‘perks’, or at least none that do not come with a hefty price tag of potential embarrassment and loss of choice. What would be an ‘extra’ for an abled person is the minimum requirement to be able to participate at all for the disabled one.

I see no need to be healed of autism. But the diagnosis of autism did help to heal (not instantly, but actually pretty quickly) the depression I’d been suffering since childhood which, in hindsight, was caused by trying to be neurotypical when I’m not. Of course the disappearance of depression changed my life. I was suddenly capable of things I never knew I could.

The Gospel doesn’t say much about it one way or the other, besides that those healed of a physical disability or sickness tend to either go away rejoicing, or end up following Christ. There is not a single suggestion that they have trouble with the transition or regret their healing. It is an assumption *we* make. The reason this point is often made in this particular type of story is because spiritual healing can be difficult and a lot of hard work and invariably the need is felt to make a leap from physical to spiritual healing.

The second point of danger is the idea that: They ‘now had to go and find a job’ and live a normal life.

Many times in those sermons, there seems to be a hinting at or suggesting, however subconscious, that these disabled people existed in a sort of vacuum before Christ comes along to heal them. They have no means to derive income, and after being healed they no longer have an excuse not to have a job. But they did have a means to derive income, and they did have a job prior to being healed – they were beggars, and some might have held other jobs.

We clearly see that many take as much control of and responsibility for their lives as they can – we find the paralytic at the one place where there is the slightest chance of healing, even if that healing in the end comes from another source. We find Bartimaeus begging. Another paralytic man had four sturdy friends willing to carry him up a roof, vandalize it, and lower him down before Christ, so he must have had a pretty active social life. Perhaps he even had some sort of occupation that did not require walking.

Their lives prior to being healed did not take place in a vacuum. Christ asks them ‘do you want to be healed?’ This is not just a question of consent. It is also a question of faith. Each of these people had developed that faith before healing was ever an option. When one of the ten lepers returns to Him after being checked over by the priests and declared clean, Jesus tells him that his faith has healed him – faith he then must already have had prior to healing.

The example of Mary

In Protestantism, Mary, the Mother of God, often appears to be just a random girl, living her life, not doing much of interest until one day an angel drops by and announces her pregnancy.

Not so in Orthodoxy. To the Orthodox, Mary is a person who develops a life of faith and spirituality *before* the angel appears on the scene, and that is what enables her to say ‘yes’.

Likewise, these disabled and sick people that Christ heals have led a life before He arrives that enables them to say ‘yes’ to Him.

So why are these sermons problematic to me? Because our thinking of disability is, many times subconsciously, saturated with the common misconceptions and prejudices that have prevailed in our societies for so long. Those mistakes are universal and timeless; we see the Pharisees make the same mistake as many of us when Christ heals the man who was blind from birth. They wish for answers. And what do they do? They address his parents. And his parents, very sensibly, reply “What are you talking to us for? He’s a grown man, he’s right over there, ask him.”

He is a grown man. He can speak for himself, and eloquently, right in front of the leadership. According to tradition, he will later head off to Gaul to become the founder of the Church at Nîmes.

Then point 3: Linking physical healing to spiritual healing is dangerous.

Why is it dangerous to link physical health to spiritual health? Christ appears to do so; there are instances He tells those He heals that their sins are forgiven. Yet He does not only say so to those He heals (in fact, in the majority of the Gospel accounts on healing physical disabilities He says nothing of the sort); He also says it to people not showing any signs of disability at all.

If anything, Christ is awfully inclusive. Everyone needs their sins forgiven. Some need physical healing. But no one needs their sins forgiven in order to be physically healed. The two are not linked. The one time the disciples suggest this, Christ sets them straight. Mind that in that case, while He does comment that the man was born blind so that God would be glorified, He does not, in fact, say that God would be glorified in the man’s healing. It is just what we tend to assume, because the man is indeed healed shortly thereafter. Christ clarifies what He, Himself, has come to do by using the contrast of darkness and light as it is with blindness to do so.

The tendency to link physical impairment with the need for forgiveness has led to some pretty ugly and disturbing convictions and practices inside and outside the Church. The other day, while reading comments on whether to use person-first or identity-first language, someone commented on the remark that most autistics prefer identity-first language that we “shouldn’t call ourselves autistic because “you’re maybe 20% autistic but still 80% human.”

As long as those kind of remarks are made without thinking, without many people even realizing what is wrong with it, even the smallest bit that is unclear in comments about the Gospel accounts will reinforce and justify it in people’s minds and allows these convictions and practices to continue.

For the sake of the uphill battle we people with disabilities are fighting, Fathers – please, please, be careful.

Monica Spoor is an Orthodox Christian and the author of Spirituality on the Spectrum: Having Autism in the Orthodox Church. She holds a Bachelor’s of Theology from the Evangelische Theologische Hogeschool in Ede and resides in Veenendaal, the Netherlands.

The Parable of the Great Feast: When the invited guests don’t come, the Master of the Feast sends his servants to the poor and the disabled, and tells his servants to compel them to come in.