Vasily and the Dragon: A Review 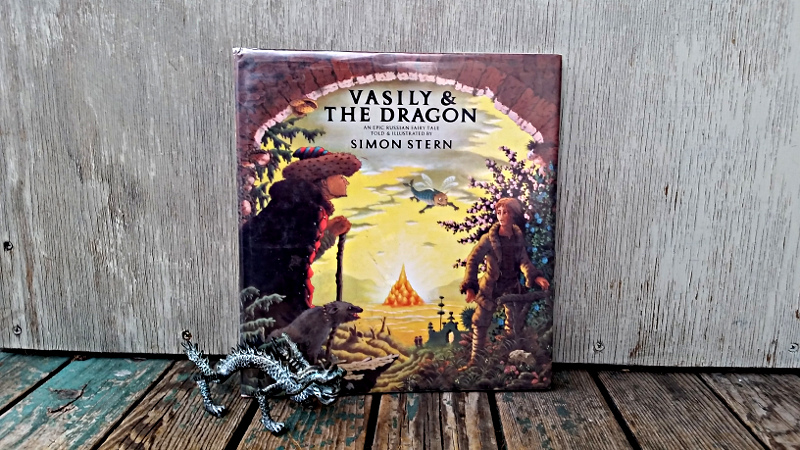 I think it’s fair to say that, after the Theotokos, St. Nicholas is the Orthodox Church’s most beloved saint. He is the patron of more countries and causes and churches and people than any other saint. We celebrate his feastday every year on December 6. We honor him every week on Thursday. We name our children after him. And we tell stories about him. Stories like “The Night Before Christmas.” Stories like Vasily and the Dragon.

Back when the Grimm brothers were collecting fairy tales and folk tales in Germany, a man named Dmitry Nikolayevich Sadovnikov was collecting such tales in Russia. While we all know the tales of Grimm, most of us know nothing of Sadovnikov or his stories, and that’s a shame. But, fortunately for us, Simon Stern took one of Sadovnikov’s stories and retold it as Vasily and the Dragon.

If you happen to find Vasily and the Dragon on the bookshelf at the library or a bookstore, it probably won’t be on the shelves with the St. Nicholas stories. But it is, in fact, a Russian St. Nicholas story.

As the story begins, Marko the rich is sleeping. And in his sleep, he hears a voice speaking:

Marko the Rich prepare yourself,
Marko the Rich bestir yourself!
Tomorrow night two guests will come:
Holy St. Nicholas will be one.
The other who knocks upon your door
Will be Lord God, the King of all!

When he wakes in the morning, Marko the Rich has his wife and servants prepare a feast for St. Nicholas and the Lord God. And when two beggars arrive, he would have sent them away, except that his daughter Anastasiya begged him to let the them stay in the barn.

Anyone who loves fairy tales can imagine what happens next. No other guests show up. Anastasiya spies on the beggars and realizes who these strangers are who have received her hospitality. A prophecy is made: A child born to a poor woman in the village will be called Vasily the Unlucky, and will gain all of Marko’s vast wealth while Marko still lives.

Marko decides the only thing he can do is find the baby and kill him, so his wealth will be secure.

Marko finds out that it’s hard to fight a baby when St. Nicholas takes the baby’s side.

Stern’s richly detailed and evocative illustrations are perfect for this sort of fairy tale.

The youngest children might find some of the illustrations uncomfortably creepy – especially the ferryman, who ferries people across a river on the way to the world’s end. The dragon’s lair is also creepy, with furniture that sits on the feet of humans, and a flower vase made from a human skull. But the dragon itself is rather bug-like, and more silly than scary.

And the story is rather too long and too complex for the youngest readers anyway. By the time a child can listen to the entire story, the illustrations will seem creepy in the best possible way.

Orthodox Christian children, who so rarely see anything related to their faith in books, are likely to be delighted to see the dark, stern icons on the walls of the monastery, and the priests’ vestments at Vasily’s wedding.

Because of course there is a wedding. Because it’s a fairy tale, and Vasily and the Dragon ends happily ever after for the not-so-unlucky Vasily.