“A Friend for Henry” is entirely wonderful 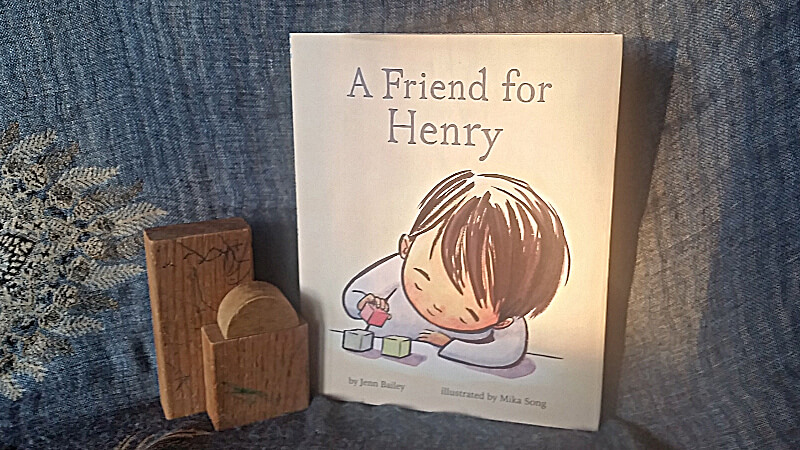 I have fallen in love with A Friend for Henry, an entirely wonderful picture book by Jenn Bailey about Henry, a little boy with autism.

The three most wonderful things about A Friend for Henry

The first most wonderful thing about A Friend for Henry is that it is from the point of view of the autistic child. If you look through picture books about autism, they tend to be from someone else’s point of view – most often a sibling (like A Manual for Marco by Shaila Abdullah, or My Brother Charlie by Holly Robinson Peete and Ryan Elizabeth Peete). These books have a place. They help children who have an autistic sibling feel less alone. But they tend to objectify and other the autistic child, portraying the child as a source of the protagonist’s difficulties.

A Friend for Henry, on the other hand, is from Henry’s point of view. In reading the book, you see the world through his eyes, and hear it through his ears. In centering his experiences, and in granting him agency, it builds compassion and empathy for autistic children.

The second most wonderful thing about A Friend for Henry is that Henry is Asian. It is, in fact, the only book about a disabled child that I am aware of where the child is Asian. And that’s important. It’s also important that, when Henry finds a friend, his friend is a Black girl. Picture books that depict friendships that cross the boundaries of race and gender have long-term impacts on children.

The third most wonderful thing about the book is that Henry wants a friend. Too often, we hear the message that autistic people don’t want friends, that they lack empathy, that they don’t care about other people. But that isn’t true, and it is important to see how hard Henry works at finding a friend.

Those three things would be enough for me to recommend the book to absolutely everyone. But there are many more wonderful things about it!

I love Mika Song’s ink and watercolor illustrations. Henry’s expressive face and the position of his hands communicate his emotions. His tense posture and the stiffness of his body contrast with the flowing motions of the children around him.

That constant flow of motion is hard for Henry. Henry loves order. He needs predictability. He struggles to predict what his classmates might do, or how they might respond. As a result, he doesn’t understand why the little girl who loves having her fingernails painted in a rainbow of colors didn’t thank him for painting rainbows on her shoes.

But the thing that stood out for me most was the systematic way Henry thinks about who might be his friend. He considers everyone in the classroom, including the teacher and Gilly, the goldfish. His inclusion of Gilly might surprise some readers. But it resonated with me. When one of my autistic children was Henry’s age, she considered video game characters to be potential friends. We didn’t yet know that she was autistic, but this odd over-generalization was an early clue. And it was intriguing to see Henry do the same.

And while Gilly can’t be Henry’s friend, it’s Gilly who brings Henry’s friend to him. He and Katie both love to watch Gilly move in her bowl. That allows them to talk about Gilly, and then about other things. Henry doesn’t like triangles. Katie doesn’t like broccoli. Katie likes the Big Slide. Henry doesn’t. But they both like blocks, and swinging, and reading, and Gilly. And that is enough to be friends.

Welcoming everyone to church: Disability and special needs: It’s easier to welcome people with disabilities to your parish if you know a bit about disability and understand what you can do to be welcoming.

The Suitcase: A review: This story is about Thomas, a little boy who lines up his blocks instead of stacking them, who loves to talk and to spin, and who takes everything literally.