The Suitcase: A Review 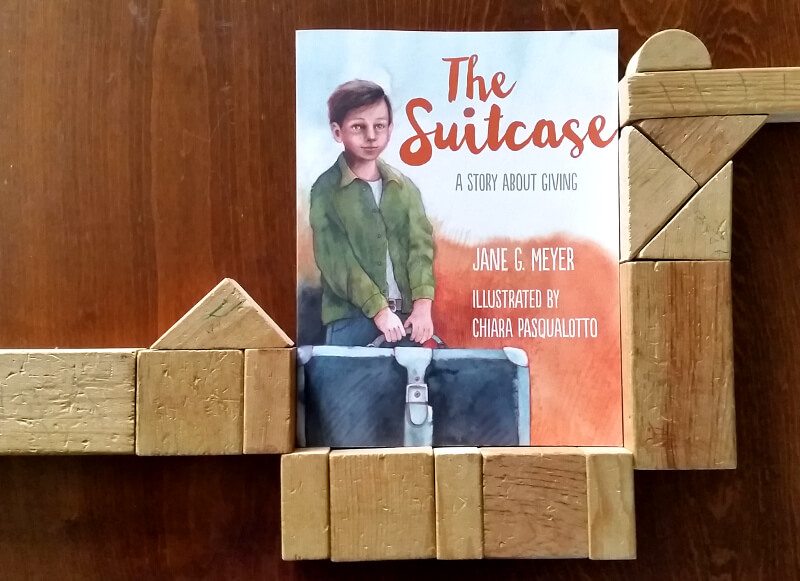 The Suitcase is, according to the subtitle, “A Story about Giving.” And it is that, I suppose. But more than that, it’s a story about Thomas.

“He was maybe just a little bit different, this child named Thomas.”

Thomas doesn’t build with his blocks. He lines them up.

He spends hours spinning in circles and reciting the alphabet.

Thomas struggles to listen. But he listens. And he hears more, perhaps, than others give him credit for.

And he takes what he hears quite literally. At church, he’s heard a lot about the Kingdom of God. He’s been planning to go there for a good, long time. He made a list of everything he’ll need on the way, gathered it up, and packed it all in a suitcase.

His family – including the dog! – aren’t sure what to make of the suitcase. Thomas is usually such a predictable child. But this – nobody predicted this.

His daddy asks Thomas to show him what he packed. Thomas pulls out applesauce, to feed the hungry. A coin purse with all his money, to give to the poor. A tablecloth, in case he needs to entertain angels. Tape, because he talks too much. And lots more.

Nobody laughs at Thomas. They listen. They think before they respond. And Thomas’s daddy finally tells him that he doesn’t need to go anywhere, because he’s already in the Kingdom of Heaven. His good heart shows that.

But, his daddy continues, lots of people don’t know how to get there. Thomas’s sister wants to tell them. So they all put away the meal they were about to have, and they go serve a meal to others.

A Story about Acceptance

Jane G. Meyer made me love Thomas, and The Suitcase is best when it is focused on him. He’s a fascinating and delightful character. The book never says that he’s autistic, but I have a (now grown) autistic child. Thomas isn’t exactly like my child. But Thomas is clearly autistic.

I asked my autistic child to read The Suitcase with me. We both expected Thomas to struggle when his dad tells him he’s already in the Kingdom. Cognitive rigidity is real. Shifting gears is hard. A meltdown seemed like the obvious next event.

But Thomas easily accepted what he was told. He was amazed that he didn’t need his suitcase. Amazed, and apparently delighted.

And I found myself wondering how an autistic child could be so flexible. I wondered what allowed him to transition so easily.

Thomas and his family lived on a farm. Maybe that had something to do with it. There is space on a farm for Thomas to wander and to spin, there are animals to talk to.

And his family clearly loves him and accepts him just as he is. They’re okay with him lining up his blocks. They don’t ridicule him for thinking that the Kingdom of Heaven is a place you need to pack a suitcase to go. And there are no neighbors to give disapproving looks, to tell Thomas that he ought to be different, that he ought to be someone that he’s not.

I absolutely love that about the story. More than anything about giving, I love the way that it’s about acceptance.

I know that was true, and still is, for my autistic child. If she’s less anxious, she’s less rigid, more capable, more willing to do new things.

I wish it hadn’t. I don’t care for books about virtues. Stories about being polite, or about honesty, just don’t work for me. I much prefer stories about children who struggle to be polite, or who learn the value of honesty.

And The Suitcase is mostly that sort of story, the sort that I prefer. Even though it’s about an autistic child’s search for the Kingdom of Heaven, it’s not overburdened with theological explanations of sin and salvation. Thomas is such a strong and endearing character that he carries his story with him through to the end.

The Art and Other Stuff

Chiara Pasqualotto’s water color illustrations are soft and lovely. If I didn’t love The Suitcase for Meyer’s story, I’d love it for Pasquallotto’s illustrations. They create a feeling of warmth and gentleness that suits the story perfectly.

The book includes, at the end, a page of “Resources for Grownups.” It provides encouragement for listening to children when they want to talk about big topics, like caring for the poor, and suggestions for engaging children in charitable work.

Loving an Autistic Child at Church: The autistic children in your parish need your love and acceptance. So do their parents.