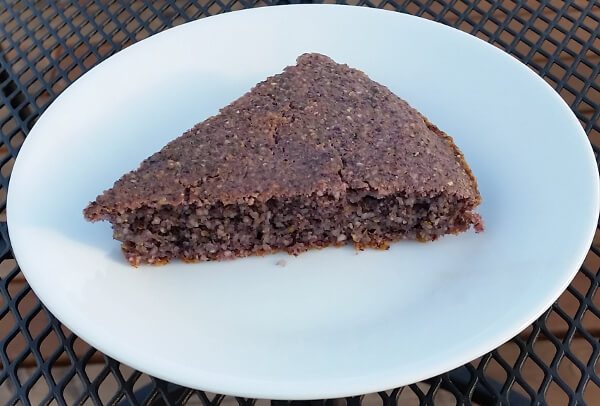 My senior year in college, my mother sent me three recipes for cornbread. My favorite was my grandmother’s recipe. It’s the one I’ve used the most over the years.

While the recipes don’t include wheat flour or sugar, they do include other ingredients that are limited or eliminated on my diet.

But it occurred to me that I might be able to adapt the recipes to work with my anti-inflammatory diet.

I made it tonight. I’ll have to admit, I don’t think that blue cornbread is nearly as pretty as purple mashed potatoes. It looks a little odd. It’s more brown than blue or purple. It looks like it might be chocolate. But, of course, there’s no chocolate in it. It tastes just like cornbread.

Which is exactly what I wanted.

Add 2 Tbsp. oil to a 10-inch cast iron skillet and heat it over medium heat.

Beat the egg, coconut milk, and 2 Tbsp. oil together in a small bowl.

Whisk the corn meal, salt, and baking powder together in another bowl.

Make a well in the middle of the dry ingredients, and pour in the wet ingredients. Whisk together until blended.