The Boy, A Kitchen, and His Cave: A Review 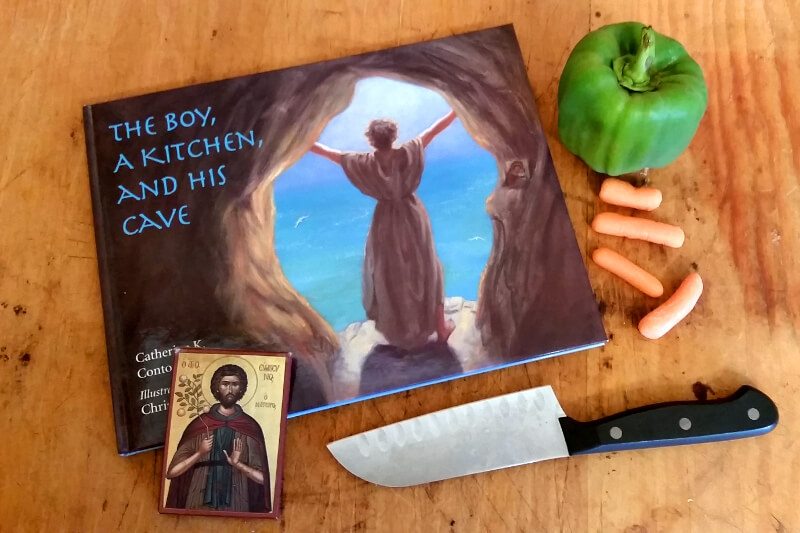 I had a small icon of St. Euphrosynos the Cook in my kitchen before I knew anything about the saint. In the icon, he’s holding a branch with three apples on it. I knew there had to be a story to go with the icon. And the story is told in The Boy, A Kitchen, and His Cave by Catherine K. Contopoulos.

Of course, the story as it’s been handed down in the church is rather sparse. He was a peasant in northern Greece in the ninth century. He moved to Mount Athos, where he became the cook for one of the monasteries. He unfailingly gave thanks to God for everything that happened to him, even when he was insulted and abused. The abbot of the monastery was given a vision of Paradise, where he saw Euphrosynos. Euphrosynos gave the abbot a branch from the apple tree. Then the abbot woke up. He held in his hands the branch Euphrosynos had given him. This miracle made Euphrosynos famous, and he fled the monastery to avoid the fame.

The Story as Contopoulos Tells It

Contopoulos uses the traditional tale as a foundation on which to build a fuller, richer story. She starts her story when Euphrosynos was a little boy. His family was poor. As soon as he was old enough to help on the farm, he had to quit school, but he didn’t mind. He seemed to have had a learning disability. Reading was a struggle for him. Nothing he learned at school made any sense. And the other kids picked on him because of his difficulties.

What was much happier working in the fields, or going to church. These things made sense to him.

When his brother grew up and married, Euphrosynos left home to find the simple life he felt like God was calling him to. He found it on Mount Athos. One of the monasteries needed a new cook, as the old one could no longer do the work. Euphrosynos settled in and worked with diligence and joy.

He had a bit of free time to himself every day. He spent that time in a cave overlooking the sea, where he could pray and sing and savor the presence of the Holy Spirit in all the beauty that he could see.

Then the abbot dreamed of Paradise, and the monks argued among themselves about whether an unlettered peasant boy could possibly have any importance at all. The abbot persuaded them. The abbot and the apples – and especially a miracle that occurred when the old cook took a bite from one of the apples.

But Euphrosynos was uncomfortable being the center of attention and admiration. He didn’t feel like a holy man. He just wanted to be the cook, and to go to his cave, and to be thankful for all that God gave him.

So he left the monastery. As his fame spread, many searched for him, but he was never found.

By adding additional characters, complications, and other details, Contopoulos brings Euphrosynos to life. In her capable hands, he becomes a fully fleshed-out person. He might be a saint, but he has struggles that anyone might have. And he finds joy in ordinary things. He’s the sort of person that a child can understand, identify with, and perhaps even emulate.

But The Boy, a Kitchen, and His Cave would have benefited from more careful editing. Contopoulos transplanted New World plants like tomatoes and bell peppers to ninth century Greece. Most children won’t know that these plants weren’t in Greece at that time, but the ones that do might find it jarring.

And here and there the dialog in the book is stiff and stilted. His conversation with his mother when he leaves home is especially awkward. She takes the opportunity to explain to him that his name means “cheery” or “merry,” which he surely must have known. The reader, of course, might not know. But there are many better ways to give that information to the reader.

The Boy, a Kitchen, and His Cave is the first children’s book that Contopoulos wrote. It’s also the first children’s book that Chrissanth Greene-Gross illustrated. She was already an award-winning portrait artist when she illustrated the book, and it shows. The illustrations look to me as though they’re done in oil on canvas (although I’m not an artist, and I could be wrong about that). The faces of the people in the book are warm and expressive. They seem solid and real.

And Greene-Gross includes many details in her illustrations that are worth paying careful attention to. When Euphrosynos is scrubbing floors, one of the monks slips and falls on the soapy water. When he gets to his feet, he berates Euphrosynos unmercifully, calling him names scowling. In the illustration, you see the monk’s feet up in the air. And behind his feet, you see an icon with a ladder. There are angels helping people up the ladder, and demons pulling them off the ladder. And those that fall off the ladder have their feet in the air, like the monk.

September 11 is the feast day of St. Euphrosynos. On this day, his troparion is sung in Orthodox churches around the world.

You lived in great humility,
In labors of asceticism
And in purity of soul.
O righteous Euphrosynos,
By a mystical vision, you
Demonstrated the heavenly
Joy which you had found.
Therefore make us worthy
To be partakers of
Your intercessions.

The White Cat and the Monk: A Review: A delightful retelling of the medieval Irish poem, Pangur Ban.

The Lenten Feast of St. Patrick: When a major feastday falls during a fast, it usually turns into a fish, wine, and oil day. Unless the feastday celebrates St. Patrick.