Brothers of the Knight: A Review 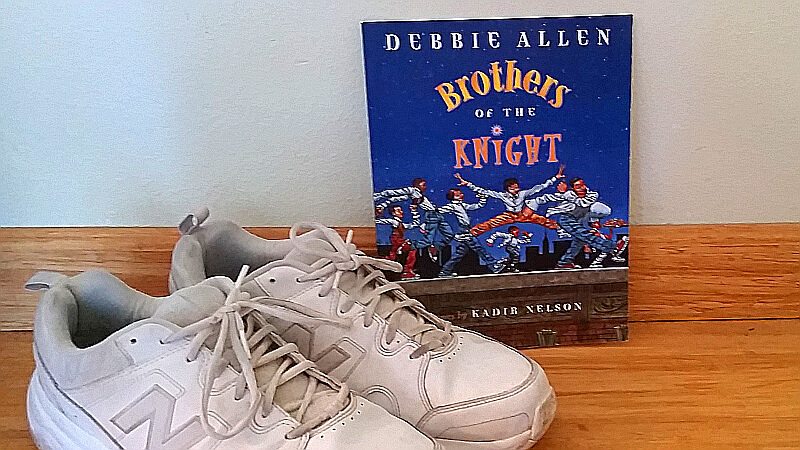 I hate to tell you that Brothers of the Knight is a retelling of the Grimm Brothers fairy tale, “The Dancing Princesses.” It is that, of course. But in the hands of Debbie Allen and Kadir Nelson, this familiar tale becomes something new and, well, magical.

The Knight in question is the Reverend Knight, the black pastor of a church in Harlem. He’s a single father with twelve sons. He loves them dearly, and he’s raising them with a firm, loving hand. And a nanny.

But the nannies never stay long, because there is a mystery they can’t solve. Every night, all twelve boys go to bed with their shoes neatly lined up at the foot of the bed. And every morning, the shoes are completely worn out. Reverend Knight wants to know why. The nannies can’t figure it out. The boys aren’t telling.

Then Sunday appears. Not Sunday the day, but Sunday the nanny. Sunday is a cross between Mary Poppins and Maria in The Sound of Music. Like Mary Poppins, she carries a bag that’s bigger on the inside than it is on the outside, and she’s a little bit magical. Like Maria, she has to navigate the treacherous distance between the father and his children – children that don’t want anything to do with her.

But Sunday has an advantage that Maria didn’t have. Sunday was the answer to their father’s prayers.

You might recognize Debbie Allen’s name. I didn’t, but then, I’m the person you don’t want on your team on Trivia Night at the pub. You probably know that Debbie Allen played the character of Lydia Grant on the television series Fame. She’s Catherine Avery on Gray’s Anatomy. She was Haley’s wife in Roots. She appeared on Broadway. Besides acting, she’s also a singer, a dancer, and a choreographer. And she runs a dance school in Los Angeles.

She has also written two picture books, Brothers of the Knight and Dancing in the Wings. In both books, you can clearly see her love of dance.

And perhaps, in Brothers of the Knight, you see a love of dogs.

The story of Brothers of the Knight is told by Happy, a large, fluffy, brown dog who happens to be sweet on the Irish setter down the street. He’s inclined to tell you, not just the story, but what he thinks of the people and events he describes.

And sometimes he seems to know things he shouldn’t. Like what happened in the Big Band Ballroom, or what happened at church. He wasn’t there – or he shouldn’t have been. And that could be a fault in the story – a story told from the point of view of a particular narrator shouldn’t include anything the narrator can’t know. But, as Happy points out, this is a magical story. And if you accept that he can talk, and he can read, then it’s not a stretch to accept that he knows whatever he knows.

Both of Allen’s books were illustrated by the award-winning illustrator Kadir Nelson. Of course, he hadn’t won any awards yet when he illustrated Brothers of the Knight. It was a debut book for both of them. But he went on to win Caldecott medals twice, along with the Sibert medal, two Coretta Scott King awards, and the NAACP Image Award for Outstanding Literary Work.

And Brothers of the Knight is just as gorgeous as you’d expect after seeing that list of awards. He created the drawings in pencil, photocopied the drawings, and applied oil paints to the photocopies. The colors are warm and honeyed, with pops of bright color here and there – a stained glass window, Sunday’s blue coat.

And the twelve brothers dance through Nelson’s drawings across the pages and right into your heart.

Brothers of the Knight On Stage

In 2014, Allen worked with Grammy award winner James Ingram, NBA All-Star Norman Nixon, her own dance academy, and theaters across the country to create an off-Broadway musical version of Brothers of the Knight. It didn’t play in the Pacific Northwest, as far as I know. Which makes me sad. I’d have loved to have seen it!

Last Stop on Market Street: A Review: This is, as far as I know, the only book that has ever won both a Newbery and a Caldecott. And it’s every bit as wonderful as you might imagine. It follows CJ and his grandmother as they leave the church and ride the bus to the last stop on Market Street.

Dance of the Eggshells: In this bilingual story, Grandma Socorro teaches Libby and her brother J.D. how to prepare and decorate eggs for the Easter party, the baile de los cascarones, the dance of the eggshells.