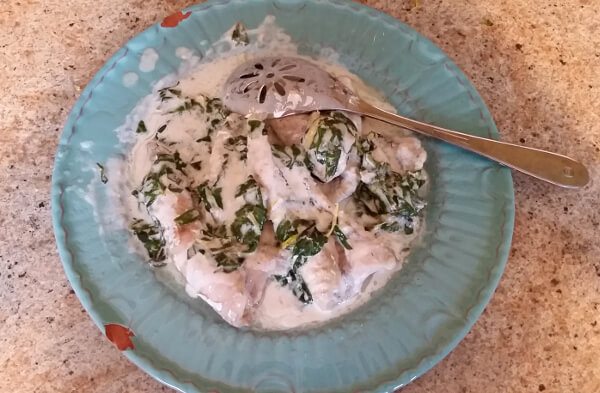 I’m in Memphis visiting my new grandson and his parents. While I’m here, I’m doing most of the cooking, and I’m preparing some freezer-to-crockpot meals they can have after I leave.

As fast and easy as it was, though, when I got done cooking, my tiny little grandson and his mommy and daddy were all three sound asleep. I tiptoed to their bedroom door, and tapped softly, and my son-in-law sort of almost woke up. I whispered that supper was ready, and he nodded.

I waited a while, thought about tapping on their door again, then decided to eat while they slept. When they woke up, I rewarmed the food. It was just as good reheated as it had been fresh off the stove.

Heat the oil in a large cast iron skillet. Medium to medium-high should work. You don’t want the skillet to be too hot.

While the skillet is heating, pat the catfish nuggets dry, then sprinkle them generously with salt.

When the skillet is hot enough that a drop of water tossed in the skillet skitters and pops, add the catfish.

Cook the catfish about 3-4 minutes on a side for nuggets or thin fillets. When it’s done, remove it from the skillet to a warm plate.

Pour off most of the remaining fat and liquid from the pan.

Whisk in the coconut milk and lemon juice. Let it boil to reduce slightly.

Stir in the basil and lemon zest.

Pour the basil cream sauce over the fish.

Or serve it later. The catfish in basil cream sauce will be good either way.