A mercy of meds, a sacrifice of sleep 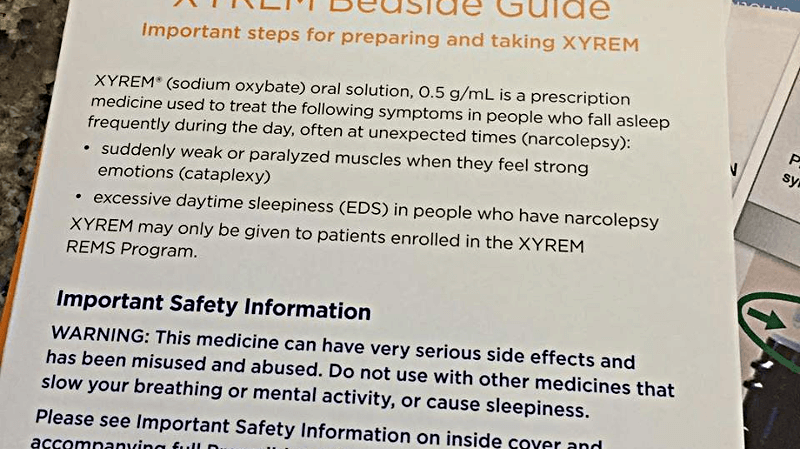 “Whenever I see a brother who has fallen asleep during the services, I put his head in my lap and let him rest there.” Pambo, 4th century monk

Every day, for most of the last two years, I have had the same ritual in the middle of the night.

At around 10:30 each night, I unlock a box that contains a medicine that allows my daughter, who has narcolepsy, to live a fuller life.

Every time I pick the bottle up from the chest, I think to myself, “Why is this little thing so valuable to the outside world?”

This is my daughter’s lifeline to wakefulness, to focus, and to avoiding very dreadful symptoms that come as a result of having narcolepsy with cataplexy. The hallucinations go away. The switching in and out of sleep mode is almost entirely regulated. Something so precious, and so costly, yet we have been blessed with the opportunity to afford it. The thought of losing that is one of our deepest fears.

Rituals in the night

With a plastic dosing syringe, I pull out a small dose- far less than what she received when she was grossly overmedicated two summers ago- and I plunge it into a prescription orange vial. I repeat the process, with a small increase in the second vial. I take a small cup, fill it two-thirds of the way with water, and I mix it with the substance inside the orange vials. I put the cap on, and pray to God that I don’t spill any. With something so precious, and so regulated, I cannot afford to lose even the smallest of drops.

Around 10:45, I wake my daughter up- if she’s asleep- and give her her first dose. I set an alarm to do the same between 2 and 2:30 each morning. There’s a lot of preparation to keep in mind for dosing. I have to make sure that she doesn’t eat for two hours before the dose. I have to set an alarm, and make sure that it’s loud enough to wake me up, and also ensure that I have a backup in case I miss it.

Sleeping through and sleeping in

The days that I accidentally sleep through dosing are some of the worst in my mind. It often means tardiness to school and work, and it means that things don’t go as well for anyone, because we are all more tired than usual. I often experience a strong sense of guilt on those days, knowing that I could have done something different for her. Usually, I’ll make some sort of change the next night to ensure it doesn’t happen again.

Some people will say to me when I’m away from home, or when someone else wakes up to give the medicine to her, “Oh, I bet you are happy to have the chance to sleep in.” The truth is, I don’t sleep through. I wake up at the same time, no matter what. It’s now a habit that is hard to avoid. It does mean that I sleep in small blocks of time, rather than straight through: one 3-hour block of time, and one four-hour block, is my usual routine. Most days, I don’t get to sleep in.

Relying on the faith of others

In her book Of Such is the Kingdom: A Practical Theology of Disability, Summer Kinard states, “It is important to understand the gift of limitedness, because we imitate Christ with what God has given us. The limits we are given in disabled bodies do not limit our ability to become holy or to believe. Even if someone has a disability that makes him unable to profess faith on his own, the faith of others will help him. Everyone baptized as an infant relies on this faith of others already, and that faith is no less shared when someone grows up without being able to understand or communicate faith on her own. Every type of faithful struggle brings holiness.”

Right now, my daughter depends on my help to administer her medicine, and keep her reminded to care for herself, whether to rest or take her daytime medication. Eventually, there may come a time where I don’t have to do that. I have no way of knowing, though.

I do know, however, that both she and I rely on that faith of others.

Everyone who gives us a chance, and everyone who asks us what we need.

Everyone that lets her sleep peacefully in the choir loft during church, and embraces her for who she is.

Everyone that asks me how things are going, and keeps me reassured.

Everyone that prays for us.

Nic Hartmann is a folklorist, artist, and nonprofit director. His first book, Northern Lights of Christ: Lessons on Faith From Above the Birch Line, was released by Park End Books in October 2021.

The Seven Sleepers of Ephesus: The story of the seven sleepers of Ephesus was, for centuries, one of the best known and most beloved story from the lives of the saints. It is a story worth knowing.

A child who never sleeps: Sleep involves an incredibly complex array of neurological events. When it doesn’t work well, some children sleep too much. And some struggle to sleep at all.

Welcoming everyone to church: Disability and special needs: It can be difficult for people with disabilities to attend church. You can make it easier.

You can find a wealth of disability resources, and more information about the book, Of Such Is the Kingdom, on Summer Kinard’s website.