The Story of Peter and Fevronia 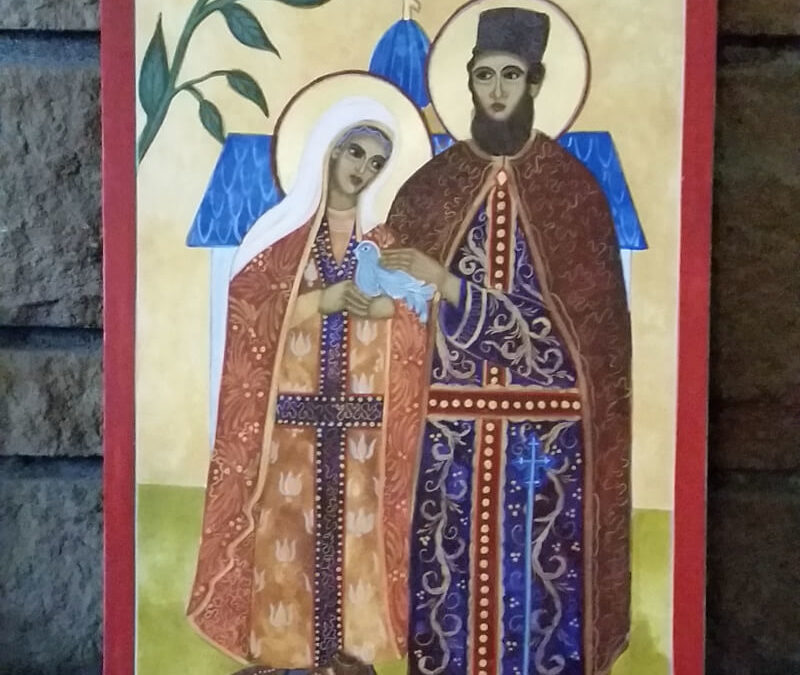 In all of the stories, Peter is the prince of Murom, and Fevronia is a peasant. That much, at least, seems to be based on historical evidence.

But how did a Russian prince come to marry a peasant woman?

An Ailing Prince and a Gifted Peasant

When the story begins, Peter is sick. He has a skin affliction. In one version of the story, he killed a dragon. In killing it, he was doused with the creature’s blood. The dragon blood caused his body to be covered in painful sores.

In another version, he had leprosy.

Whatever it was that caused his affliction, Prince Peter was sick. And the doctors couldn’t cure him.

But Fevronia could. Fevronia was the daughter of a beekeeper. Some versions of the story say her father gathered pitch. And perhaps he did. But beeswax and honey have medicinal properties, especially for skin lesions. Because Prince Peter’s servants sought her out, and asked her to heal their master, I’m going with the version that says her father kept bees.

Fevronia was more than the beekeepers’s daughter, though. She was beautiful and tough, strong and wise. In addition, she had studied herbs and other remedies, and was a gifted healer.

After she nursed Prince Peter back to health, Prince Peter decided to marry her. Some say he’d fallen in love with Fevronia. Others say that, when she agreed to nurse the prince, marriage was the price she demanded for her services. Perhaps both are true.

In any event, Peter and Fevronia were married. But the boyars back home weren’t happy that their prince had married a peasant. And the boyars’ wives were furious. Febronia may have saved their prince’s life, but a beekeeper’s daughter was not welcome at their tables.

I imagine that Fevronia often sought the prayers of another saint who had married above her station, Empress Theodora, wife of Justinian the Great. I’m sure the bearkeeper’s daughter interceded for the beekeeper’s daughter. Her situation was one she had known all too well.

Eventually, the boyars’ wives prevailed upon their husbands to demand that Fevronia go into “voluntary” exile. If she would just go, they told her, they would load her up with riches and treasures and wealth.

Fevronia considered their offer and, to their relief, she agreed. But, she said, it didn’t seem right for her to take their riches. She was, after all, a peasant.

And perhaps she thought, but didn’t say, it would be foolish to take their treasures. A woman traveling alone, laden with wealth, would be a tempting target for bad guys. Including the boyars themselves.

So, she said, if she could take with her just one thing, she would go.

The boyars were so pleased with themselves for persuading her to see the good sense of their arguments that they immediately agreed. Then they asked her what the one thing was that she wanted.

The boyars couldn’t go back on their word. But surely Prince Peter would refuse to go.

Fevronia was his wife, his heart, his love. If she was going into exile, he was going with her.

And so Peter and Fevronia left. And some of the boyars smiled secret smiles, thinking that now, with the prince gone, they would take his place.

But there were many boyars, and only one could be prince. And so war came to the Murom, bringing with it famine and death. After a time, the boyars who remained recognized their sin. They had failed to extend philoxenia, radical hospitality and welcome, to Febronia, and so had brought disaster on themselves. They repented, and sent messengers to Prince Peter and Princess Fevronia, begging them to return and save them from themselves.

And so the Prince and Princess returned and restored peace and prosperity to the land. They lived long and ruled wisely and were beloved of all of their people.

At the end of their lives, they became monastics. They died on the same day, in answer to their prayers, and were buried in a common tomb.

The Day of Love and Daisies

As years passed, and decades, and centuries, their story was told as the tale of true love, joyful fidelity, and happy marriage. Their feastday came to be celebrated as the Day of Love. People went to church on that day to ask the saints to intercede for their marriages, or to help them find a spouse.

And because their feastday falls on July 8, when meadows are carpeted with daisies, young men gathered daisies to give to their sweethearts. Daisies became the symbol of true and faithful love.

Andrea Ward was an artist, an artisan, an iconographer, and a friend. Occasionally, I would ask her if she could do a sketch for me to go with a blog post I was working on. Andrea was never one to go half-way; she invariably did way more than I asked. She created the icon of Saints Peter and Fevronia that accompanies this story using traditional egg tempera and gold leaf. You can still see more of her icons and the other wonderful works that she created at her blog, Andrea’s Kitchen Studio. May her memory be eternal!