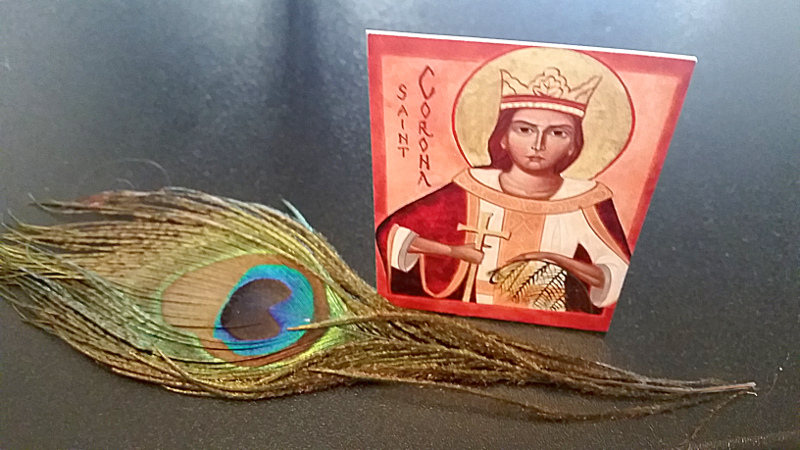 St. Corona seems to have become the patron saint of pandemics. But she hasn’t always been so. Here’s how it happened.

The martyrdom of St. Corona and St. Victor

St. Corona was martyred in the year 170, or perhaps 177. As with so many early saints, we know very little about her. The accounts of her martyrdom all agree that she was 16 years old, the wife of a Roman soldier. She was a Christian. The army was in Syria, or perhaps France, or Sicily, or Damascus, when a soldier named Victor was charged with the crime of being a Christian. The authorities brought him before Sebastian, the local judge, who hated Christians. Sebastian decided to make an example out of Victor.

As Victor was being tortured, Corona saw his sufferings, and wanted to help him. So she declared herself a Christian, and knelt down to pray for him. As she prayed, she saw a vision of two crowns descending, one for him, and one for her.

Corona’s defiance made Sebastian furious. He had her thrown in prison and tortured. The next day, he had her killed by ordering her hands and feet tied to the tops of two palm trees which had been bent down to the ground. When the trees were released, they sprang back to their normal position, and she was torn in two. Victor had not yet died of his injuries, so Sebastian ended the events by having him beheaded.

St. Corona and St. Victor are commemorated together on November 11 in the Orthodox Church, and on May 14 in the Catholic Church.

How St. Corona became the patron saint of pandemics

In 997, the Holy Roman Emperor Otto III, had relics of St. Corona translated from Anzu, in northern Italy, to Aachen, in western Germany. St. Corona’s relics were installed under a marble slab in the floor of the great cathedral in Aachen, the same cathedral where Charlemagne was buried.

When the bubonic plague came to Europe in the 14th century, the people in Austria and Bavaria sought the prayers and protection of St. Corona. And many towns and villages were spared from the devastation of the plague by her intercessions. In gratitude, communities named churches and towns for her. And people continued to seek her prayer in times of trouble, whether it was money trouble, or storms, or infectious disease.

Over the years, the towns and churches kept their names, but St. Corona herself was largely forgotten. Then in 1910, her relics were moved from their crypt under the floor of the cathedral to a shrine made of gold, bronze, and ivory.

The shrine, and the relics, went into storage some 25 years ago. And last winter, Aachen Cathedral decided to include the shrine in an upcoming exhibition of gold craftsmanship, so they pulled it out of storage for cleaning and restoration.

And then came the coronavirus.

While the shrine has been restored, the exhibition was cancelled, at least for now. But St. Corona herself is no longer forgotten. The pandemic saw to that.

Her name, Corona, means crown. St. Corona may have been given her name because of her vision of crowns. The coronavirus was given its name because, under extreme magnification, it looks a little bit like a crown. So the saint and the virus share a name.

If that weren’t enough, at least in Bavaria and Austria, she was once called on for protection against the plague. And then there’s the fact that this pandemic has caused devastating financial hardship to so many, and she has long been called on for help with money problems.

And the portion of her relics that aren’t in Aachen are in Anzu, Italy, where the pandemic hit early and hard.

Heavenly patronages grow out of these sorts of connections. While St. Corona may not have been the patron saint of pandemics before, she is now.

In the Orthodox Church, St. Corona is also known as St. Stephanie, because Stephanie, like Corona, means crown. The Apolytikion used in the Greek Orthodox Archdiocese of American uses the name Stephanie.

With songs of praise, let us hymn the steadfast athletes of Christ:
divine Victor, Vincent, and the noble Stephanie, with Menas the all-glorious.
Having crushed the foe in sundry ages and countries,
they rejoice together, glorified in the Heavens.
Have mercy, O Christ Saviour, on all, by Thy Great Martyrs’ prayers.

The other two saints mentioned in the hymn, St. Menas and St. Vincent, were martyred in the year 304. St. Menas was a soldier in Egypt, and St. Vincent was a deacon on Spain. Their only connection to St. Corona is sharing her feast day.

The icon of St. Corona

The icon of St. Corona is by the hand of Randi Maria Sider-Rose.