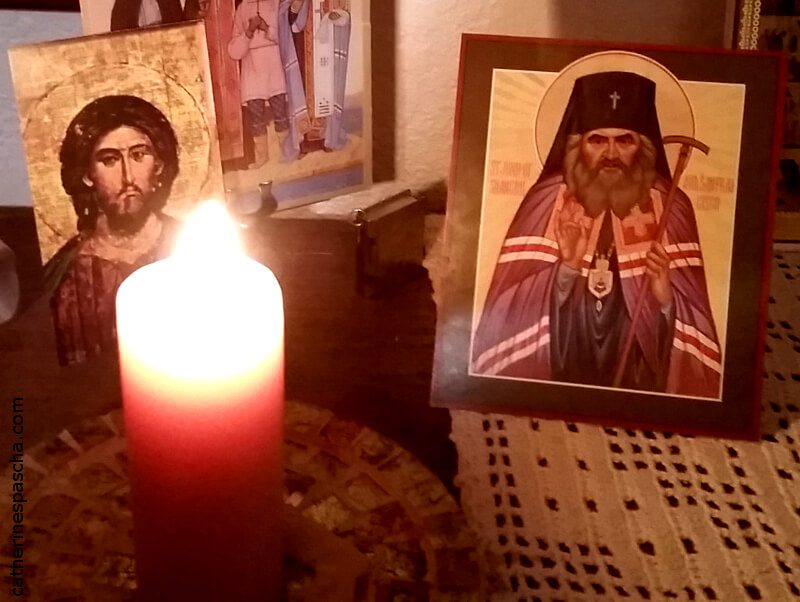 When I was a child, my family was Presbyterian. I was baptized in the Presbyterian Church in Oxford, Mississippi, by the same minister who had married my parents and who would, many years later, bury them. As a Presbyterian child, I learned to regard God with reverence and awe. I did not learn to love the saints.

Presbyterians don’t do saints. When I was in college, George Herbert’s poem, To All Angels and Saints, expressed my thoughts perfectly. I could admire the saints, but to venerate them, to turn to them in prayer, was to risk idolatry. I couldn’t go there.

Yet it wasn’t many years later that I went there. Reading the Commonitory of St. Vincent of Lerins led me to accept the veneration of the saints.

As soon as I understood that the saints could be venerated, I began to read their lives in earnest. It was a joy that is hard to explain. It was like a whole world had been opened to me that I had never imagined existed. The saints were people who had loved God and had come to know him as an intimate friend. By getting to know these saints, I could, through them, know and love God more.

But I didn’t just love them for God’s sake. As I got to know them, I came to love them for themselves. The saints are like this most wonderful extended family. Some of them are staid and formal, some are silly. Some care a great deal about certain issues or certain people are places. Others have broader interests. In this life, some were rich and some were poor, some were important and some were insignificant. Some lived peaceful, quiet lives, and some were wild and fierce. Yet in all of them, in all their infinite variety and beauty, you see God’s love.

A Saint Close at Hand

At some point, I read the life of St. John of Shanghai and San Francisco. His name intrigued me. I was used to reading about saints from long ago and far away. But San Francisco? That’s just down the road a piece. And he was born in 1896, making him just four years younger than my paternal grandmother. He was a saint of here and now. As I learned more about St. John, his entire life intrigued me.

When you read about St. John, you’re likely to read about miracles. He was a man of simple and profound faith, and signs and wonders followed him. But the thing that delighted me most was his love for the saints! It was said, when he was a child in school, that he spent more time reading the lives of the saints than he did attending classes. As a result, St. John knew more than almost anyone about the saints, and his mind and heart and life were molded by his devotion to the saints.

In 1951, when he moved to Paris, he discovered that there were many, many more saints, Western saints he’d never heard of before! He was like a kid in a candy store.

He began to gather information about the saints of Western Europe who lived before the great schism. Many of these saints had been venerated only locally. Nevertheless, he found their lives and images, and he submitted a long list of them to the Synod to have them included in the calendar of Orthodox saints.

Now, of course, St. John of Shanghai and San Francisco is himself in the calendar of Orthodox saints. He died in Seattle on July 2, 1966. Today is his feast day.

If you want to learn more about St. John, you can read a longer story of his life from St. John the Wonderworker Orthodox Church. They include a list of links to even more resources.

Kontakion to St. John of Shanghai and San Francisco

To thee, the pastor and protector of a countless host,
Of homeless orphans, widows, paupers, and afflicted souls,
Do we offer anthems born of love and thanksgiving.
As a hierarch filled with grace and zeal for piety,
Do thou save us from the foes of apostolic truth,
For we cry to thee:
Rejoice, O great wonderworker John.

Upon the Annunciation and Passion: One of my very favorite poems by John Donne is a reflection on the liturgical calendar.

Silent as a Stone: A Review: Mother Maria of Paris defied the Nazis to save as many Jewish children as she could.