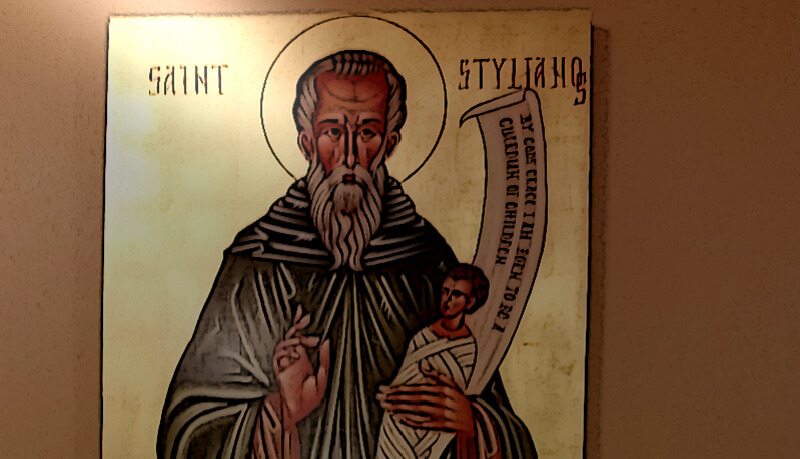 St. Stylianos was the child of wealthy parents in Paphlagonia, a region in what is now Turkey. No one is quite sure when he lived; it may have been the fourth century, or the sixth, or some time in between. But, like so many other saints, he had no use for the wealth he inherited from his parents. When they died, he gave it all away, and retired to a monastery, to seek the good things of heaven rather than of earth.

At some point, he chose to leave the monastery and take up life in a hermit’s cave. According to some stories, the other monks didn’t much care for him, and out of jealousy or spite, they drove him out. Or he found it so unbearable he chose to leave. Whatever happened, he decided to go live alone in a cave in the wilderness. There, he would be able to devote himself to prayer and fasting.

But he didn’t withdraw completely. He would leave his cave and spend time among the people. It seems that, for him, it wasn’t enough to pray and fast. He wanted to add works of kindness and goodness to his ascetic labors. So it became his custom to go out to serve. Then he would return to his cave to rest and pray.

One night, as he asked God to grant him guidance for the following day, he felt the presence of the Holy Spirit consuming him, filling him with peace and joy. And the next day, as he visited people, to teach them and comfort them, he laid his hand on a child who was ill. That was something he’d never done before. And at his touch, the child was healed.

At that point, his life changed. People came to him for healing. And parents brought their children who were sick and afflicted. The sick recovered, by the power of God, by his prayers, and, he told them, by their own faith.

And the children! They loved the hermit Stylianos. He wasn’t like the other hermits, grave and severe. He always, always smiled. And he received everyone with joy. Even, especially, the mothers with their flocks of noisy, busy children.

Daycare at the hermitage

Of course he refused to allow the mothers to pay him for taking care of their children, any more than he would accept payment for healing them when they were sick. The joy and peace that God had given him was all the pay he ever wanted, and all that he would accept.

Before long, he had to find more space, and recruit helpers from among the other hermits. And there were people, even then, who saw the possibility of profit in what he was doing. They came to him and told him how he could use his talents to get rich (giving them a cut of the profits, of course). He would smile at them, and tell them he was already rich. He had everything he needed, and joy besides.

In his icons, St. Stylianos is always shown holding a baby, sometimes two. And he holds a scroll that says, “By God’s grace, I was born to be a guardian of children.”

As a worker of God-given wonders, and a protector of the youth and infants, O Stylianos, our Father and healer of Christ, grant children to barren mothers, and ever cover newborn babes, for to you was richly granted grace from God, as you struggled for Him in asceticism as an angel.

St. Irene and the Apples of Paradise: St. Irene’s story starts out like a fairy tale. But, though she was beautiful, she wasn’t interested in marrying the prince.

A Child Who Never Sleeps: Two of my children struggled to sleep, and now my grandchild has the same struggle. Here’s some of what I learned. (Adding prayers to St. Stylianos would not go amiss!)

Leave Me Alone! A Review: This Caldecott honor book about a grandmother who just wants to be left alone so she can do her knitting will surely become a classic.