How the Trollusk Got His Hat: A Review 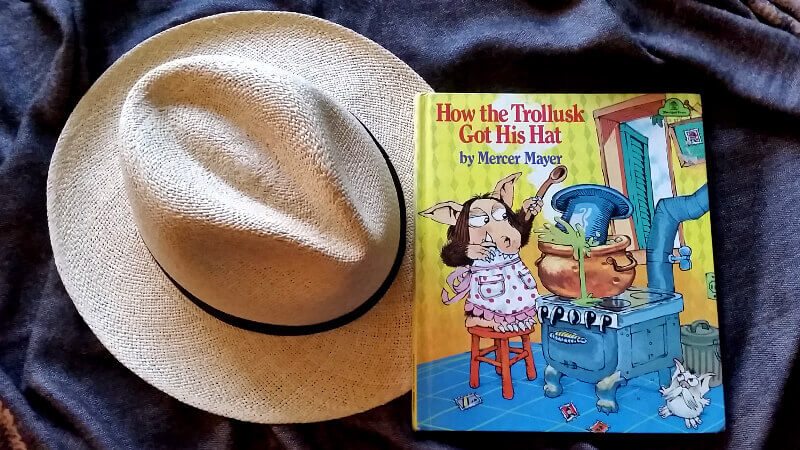 When my kids were young, they adored Mercer Mayer’s Little Critter books. And I may have adored them as much as my children did. They had delightful illustrations and charming stories told in Little Critter’s voice and always, always from his point of view. And then I discovered that Mayer wrote other books, too. His version of The Pied Piper is not to be missed. But Mayer’s book that my children loved the best was How the Trollusk Got His Hat.

How the Trollusk Got His Hat is the story of Reggie McLeod and the Stamp-Collecting Trollusk. At the beginning of the story, Reggie is walking to town, wearing his new Squeezle-skin hat and “feeling very dapper indeed.” The Stamp-Collecting Trollusk is in his Happy Home beyond the Edge of Nowhere (there are signs to assure you of the locations), where he is making tango soup.

The wind catches Reggie’s hat and blows it away. Reggie tries to catch it. He even rents a plane (a 1911 Fizzbat) to chase his hat, but it’s no use. The hat seems to be lost forever.

But it lands in the pot of soup that is bubbling on the Trollusk’s stove. The Trollusk examines the hat, and finds Reggie’s name and address inside it. Being an honest monster, he leaves his Happy Home and sets out to find Reggie and return the hat.

Not an Island Joe Franchise

The rest of the story chronicles the misadventures of Reggie and Trollusk, as the man searches for the hat and the monster searches for the man. But the misadventures aren’t just told in the words. Mayer’s illustrations are extraordinarily rich and detailed. The Trollusk creates panic and commotion wherever he goes. He’s a monster, after all. It’s not his fault that so many adults run screaming from him without ever learning anything about him.

The screaming, frightened people can’t be missed. Neither can the women joggers who run through page after page, ignoring (mostly) the commotion around them.

There’s another running joke that’s easy to miss: Island Joe. If you look carefully, every sign on every business, every label on every product, refers to Island Joe. You might not notice them at first. But once you notice them, they’re inescapable, subtle, and silly.

Until you get to the very last spread in the story, which is just outside a church. You see a priest is rich vestments, an altar boy, people, and pigeons. And there are signs. The first announces Saturday Night Bingo, which, according to the sign, “is NOT an Island Joe franchise.” And another sign, right by the door of the church, says, “All who enter here are welcome.”

It’s not clear, from people’s faces, that everyone believes what the sign says. But the priest is smiling as Reggie and the Trollusk arrive at the church together, wearing their hats and “feeling very dapper indeed.”

I love the wordplay in this book. I love the surprises and silliness that fill all the illustrations. I love the diversity of the people in Reggie McLeod’s world. I love Trollusk’s gentle determination to do the right thing, no matter how other people react to him.

And I love the fact that Reggie and the Trollusk go to church.

Reggie and the Trollusk just might show us the way.

Miz Fannie Mae’s Fine New Easter Hat: A review: when Miz Fannie Mae’s daughter and husband bought her a new Easter hat, she thought it was much too fine. But it turned out to be perfect, in ways she’d never imagined.