The Zero Dads Club: A Father’s Day story for kids without dads 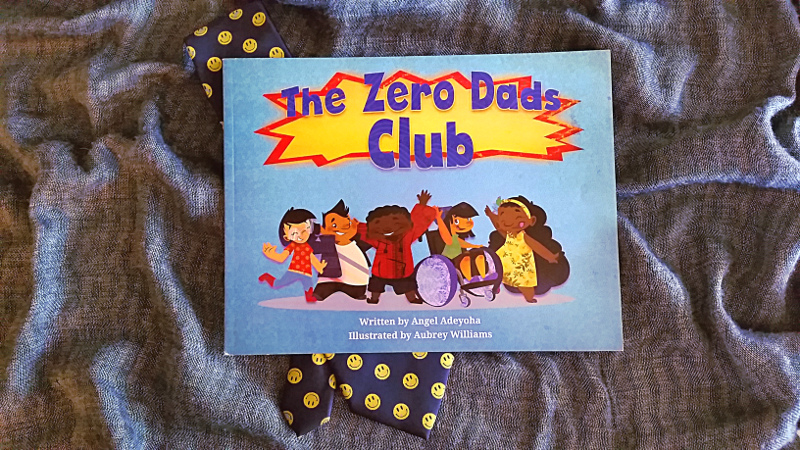 Father’s Day can be hard for children who don’t have a father. At school, there may be crafts and projects celebrating fathers. And those are wonderful! But not for the children who feel left out. If the teacher’s plan doesn’t include the kids who don’t have a dad, what are they to do? In Angel Adeyoha’s charming book, The Zero Dad’s Club,, the children come up with their own plan.

The Moms Only Club

When The Zero Dad’s Club begins, the children in Miss May’s classroom are working on a Father’s Day project. They’re painting pictures of ties, which will be made into Father’s Day cards. Akilah is hurt and angry. She doesn’t have a father, and she wishes they could just cancel Father’s Day.

Her friend Kai doesn’t have a father, either. And he feels left out, too. But he’s not angry. He’s observant. He says they’re not the only kids in the class who don’t have a dad. They should form a club for all the kids who only have moms. They could call it the “Moms Only Club,” and make a project for their mom while the other kids paint ties for their dad.

Miss May approves, and so at lunchtime, they announce the Moms Only Club.

As some of their classmates ask to join the Moms Only Club, Akilah and Kai learn that real families can be more complicated than they knew. Some of their friends who don’t have dads also don’t have moms.

When Matias asks to join the Moms Only Club, Akilah tells him that he can’t. He lives with his abuela and his tia, and they aren’t moms.

But Ellie has a better idea. Why can’t they be the Zero Dads Club? That would let them include everyone who doesn’t have a dad, no matter the reason.

The children all agree. And the Zero Dads Club grows to five children. They start working on cards for the grownups they love. As they work, they tell each other about their families.

And then it was Melanie’s turn. Melanie is reluctant to talk about her family. But everyone else has talked about theirs. So she explains that she lives with her Ma, who used to be her Papa. And the other children accept her story, just as they accepted all the others. All of their families are different. And different is okay.

Mirrors and windows and philoxenia

If you have children in your life who have zero dads, they’ll love The Zero Dad’s Club. They don’t often get books that reflect their life and their family and their experiences back to them. And they need books that serve as mirrors on their lives. Kids who have access to mirror books read more, and read more fluently. They also feel more stable and more secure in their identity.

But children need more than mirrors. They also need books that provide windows into the lives and experiences of others. Children who are introduced to a wide range of people and experiences develop more empathy. They are more willing to interact with people who are different from themselves. Window books help them develop the virtue that, in the Orthodox Church, we call philoxenia – the love of strangers. That makes The Zero Dad’s Club a great choice for children in more traditional families as well.

Besides coming from different sorts of families, the children in The Zero Dad’s Club are diverse in other ways. Akiyah and Kia are Black. Ellie is Asian, and wears glasses. Matias is Latinx. Melanie is white, and she uses a wheelchair. For children who live in diverse communities, and for those who do not, The Zero Dad’s Club offers windows and mirrors for just about everyone.

When Charley Met Emma: A social story about disability: Charley’s mom had taught him that different isn’t weird, bad, sad, or strange. But when Charley meets Emma, he isn’t so sure. Emma doesn’t have hands, and she uses a wheelchair. And Charley doesn’t know what to say or to do.

The Great Big Book of Families: This incredible book talks about all the many ways that families can be different. It talks about who’s in a family and where families live. It talks about homes, school, jobs, food, clothes, pets, celebrations, and more. It even includes an activity for making a family tree.

How to love strangers: Lessons in philoxenia: Philoxenia, the love of strangers, can be difficult. But that doesn’t make it optional. It just means we have to work at it.