Dad, Jackie, and Me: More than a baseball story 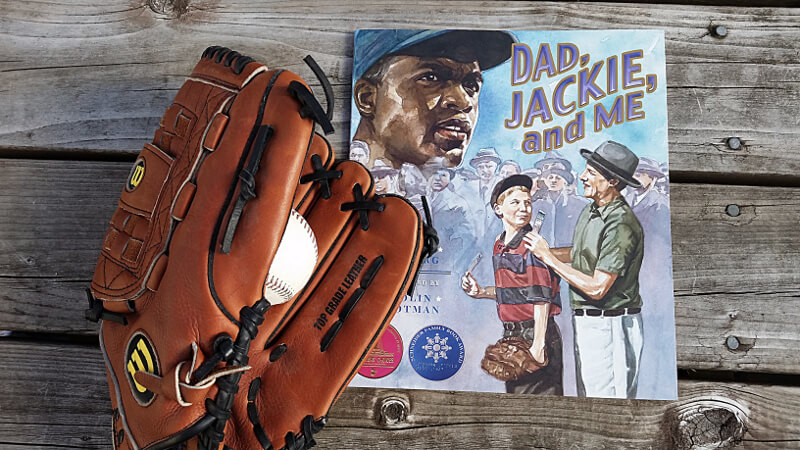 April 15, 1947. A boy in Brooklyn is glued to the radio. It is opening day of the baseball season. Jackie Robinson is about to play his first game with the Brooklyn Dodgers. The boy dreams of going to Ebbets Field to see the Dodgers play.

And when his dad, who knows little and cares less about baseball, decides he wants to meet Jackie Robinson, the boy’s dream comes true.

Myron Uhlberg captures all the excitement of a historic baseball season in his award-winning book, Dad, Jackie, and Me. And if this book were no more than a story about a boy and his dad and baseball, it would be worth reading. But Dad, Jackie, and Me is so much more than that.

Dad, Jackie, and Me is a story about a boy and his dad, who is deaf. It’s not a story about deafness. It’s a story that simply accepts deafness and includes a deaf character in an ordinary story about a dad and a boy doing an ordinary thing: sharing their love for a favorite baseball player. And the ordinariness of it makes the book quite extraordinary.

It’s also a story about Jackie Robinson, and therefore a story about racism and discrimination. Dad, Jackie, and Me presents this part of the story clearly and directly, but in a way that is completely appropriate for young children.

As Jackie stood at first base, the Giants began hooting and hollering. They called Jackie names. Horrible names. “What are they saying?” Dad asked.

“Tell me.” Some of those words I had to finger spell. I knew no sign for them. Dad listened with a sad little smile on his face.

The real dad in Dad, Jackie, and Me

In the Author’s Note at the back of the book, Uhlberg explains that he was the boy narrating the story. His father was deaf. And together, he and his dad really did follow Jackie Robinson’s career.

Because of his deafness, his father had not been encouraged to take an interest in sports. But he had a powerful interest in Jackie Robinson. He and Jackie both faced unfair treatment, Robinson because he was black, and Uhlberg’s dad because he was deaf. Both men, in Uhlberg’s words, “worked to overcome thoughtless prejudice and to prove themselves every day of their lives.”

Uhlberg’s father told him stories about another baseball player, William Ellsworth Hoy. Hoy played in the early days of baseball, in the late 1800s. And he was deaf. Hoy is the reason that umpires use hand signals when they call strikes and balls. And Hoy was one of the reasons that Uhlberg’s father felt such a strong connection to Jackie Robinson.

Art that harks back to another day

Colin Bootman illustrated Dad, Jackie, and Me with subtle, muted water colors. The palette is mostly gentle greens and warm browns, highlighted with occasional pops of red. The effect is at once lush and peaceful, and more than a bit nostalgic.

Children won’t notice the nostalgia, of course. For them, the story and the illustrations will feel fresh and new.

After reading this book, your children might be curious about deafness and sign language. Kid’s Quest: Hearing Loss, from the CDC, provides age-appropriate information about deafness.

Your children might also want help understanding why people were mean to Jackie Robinson. There’s a lot to talk about. You could start with this article about Jackie Robinson from Mental Floss, or this one from History for Kids.

The Bat Boy and His Violin is another story about a boy, his dad, and baseball. It takes place the year after Dad, Jackie, and Me. The dad in the story is the manager of one of the Negro League teams, which are struggling after Jackie broke the color barrier and many of their best players leave to play for the Major Leagues.

Baseball Saved Us: A Review: This wonderful book, by the author of Passage to Freedom, tells the story of a Japanese boy and baseball in a Japanese internment camp.