Pascual and the Kitchen Angels: A Review 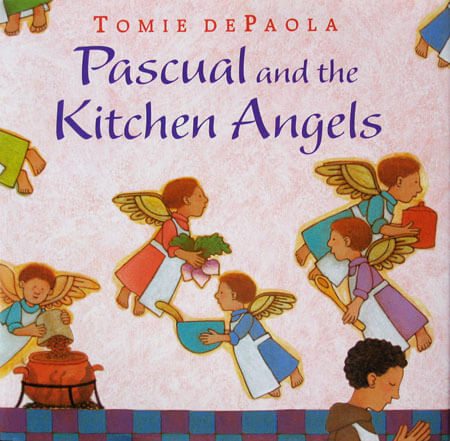 Even though “Pascual” means Pascha, Tomie dePaola’s Pascual and the Kitchen Angels isn’t a Pascha book. It’s a folk tale about Saint Pascual. And it is every bit as delightful as you expect a book by dePaola to be.

Before going to the monastery, Saint Pascual had been a shepherd. While he cared for the sheep, he prayed, he sang, and he made garlands of flowers to adorn their necks. He was known for his love of animals. He was also known for his generosity in feeding the poor and hungry.

And so he decided to join a Franciscan monastery, where he could continue this work. But the Franciscans put him to work as a cook in the monastery kitchen.

He didn’t know how to cook, but he knew how to pray. So he prayed, and angels cooked. And when his brother monks finally realized how the meals got made, they allowed Saint Pascual to join the monastery’s work of feeding the hungry.

Why You Need This Book

The story and the illustrations in Pascual and the Kitchen Angels are pure dePaola: sweet, vibrant, and playful. The words and the images go together like bread and butter or chocolate chip cookies and milk.

The angels in their long white aprons and the kitchen cat are particularly delightful. As are the singing sheep. And, well, all of it.

And for parents, dePaola includes a lovely note at the end of the book with more about the life of Saint Pascual. If your children love the book as much as I do, they may want to know more about this saint, and dePaola makes it easy for you to tell them more.

My First Easter: A Review: A board book about Easter by Tomie dePaola.

Pascha Baskets: The history of the Easter basket, including a traditional list of what to take to church in your Pascha basket and ideas for a perfect Easter basket for little ones.

St. Scholastica and the Thunderstorm: When St. Benedict refused his sister’s request, she asked God to force the issue. He did.