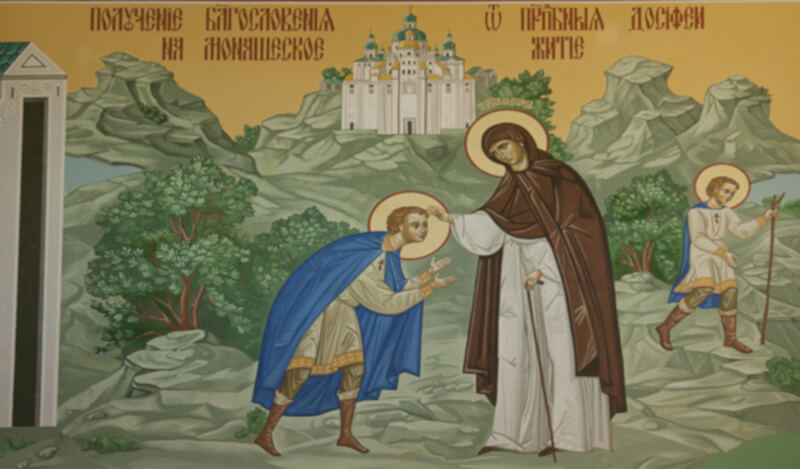 On September 25, 1776, the monk Dositheos, recluse of the Kiev Caves, died at his prayers. That was the end of his life. It was not what anyone would have expected at the beginning.

Daria and her grandmother

In 1721, in a little town east of Moscow, a child was born to a noble family. The child’s name was Daria. Her family were all very important people. And, to Daria, no one was as important as her grandmother, the nun Porphyria. When Daria was only 2 years old, Porphyria persuaded Daria’s parents to let the child stay with her in the Monastery of the Ascension in Moscow.

Daria and her grandmother were inseparable. Porphyria taught Daria to read and to pray. And Daria particularly loved helping her grandmother distribute alms to beggars who came to the monastery. But every once in a while, Daria would try to avoid a beggar who was particularly ragged or unkempt. When her grandmother noticed this, she would invite the beggar to join her in her cell, and have Daria serve them at the table. In this way, Daria learned to love the poor.

What can you do with a problem like Daria?

When Daria was nine years old, her parents came to the monastery and told the nun Porphyria that it was time for them to take Daria home. She needed an education that was more fitting for a child of a noble family.

But the family’s focus wasn’t really on education. They were focused on the social scene. They held lavish parties, feasting and drinking late into the night. Daria preferred to continue living as she had in the monastery, eating little, rising early to pray, and inviting beggars into the house and even to her room, so she could provide them with food and whatever else they needed.

And it wasn’t enough that Daria didn’t fit into her family. In some ways, she was a typical young teen. She was quite willing to sass her parents, telling them that they were doing everything wrong.

Daria’s family grew exasperated with her. Finally, when she was 15 years old, they decided that the only thing they could do was find a husband for her. Once she was married, they thought, she would settle down and enjoy the good things of this life.

But Daria did not intend to marry.

One pretty May morning, Daria and her sisters took a walk in the meadows and forests near their home. While Daria’s sisters were watching birds and looking at wildflowers, Daria was watching her sisters and looking for a way to escape. Her seemingly aimless rambling finally led her down a path where her sisters couldn’t see her.

She was on her way back to her grandmother’s monastery.

It wasn’t an easy journey for a teenaged girl travelling alone and on foot. When she finally got there, she realized that her parents would certainly look for her there. In fact, they could have gotten there ahead of her. So she slipped away as silently as she had slipped away from her sisters in the forest.

There was another monastery she had visited with her grandmother. The Monastery of St. Sergius of Radonezh. It was a men’s monastery, about 25 miles away from Moscow. She would go there.

Daria, of course, could not stay at a men’s monastery. So she went to the market and bought new clothes. She cut her hair, put on the clothes, and took a new name. And so it wasn’t a young noblewoman named Daria who set out for the monastery. It was a serf named Dositheos.

Because Dositheos hadn’t been a serf for very long, there was much that he didn’t know. He didn’t know, for example, that a serf who had left his land and his landowner had to carry papers to prove he wasn’t a runaway. And he didn’t know that a monastery could not accept a serf who didn’t have these papers. So when Dositheos asked the abbot at the monastery of St. Sergius to receive him as a novice, the abbot said no.

But rules, as they say, are made to be broken. And the abbot, after speaking with him for a long while, said he could live there. Unofficially, of course.

And so he did, until his mother and his sisters visited the monastery. It had been three years since Daria had run away. But when they saw Dositheos, they recognized Daria. And when he saw them, he recognized them. Before they could speak to him, he went back to his cell, gathered a few things into a bundle, and fled.

Dositheos decided to go to Kiev, about 300 miles away. When he arrived there, he asked the abbot at the Monastery of the Kiev Caves to take him in as a novice. He got the same answer he had gotten before: Because he was a serf, he couldn’t join the monastery without papers proving he wasn’t a runaway.

But there was another way that was open to him. He could become a hermit.

Not far from the Monastery of the Kiev Caves, and near the Kitaev Hermtage, was a wooded hill that was pocked with caves. Dositheos chose one of these caves, and took up the secret life of a hermit.

It wasn’t entirely secret, of course. He never left his cave except at night, and then only long enough to gather roots and such for food. But a monk from Kitaev knew where he was, and would bring him bread and water.

Dositheos had been living in his cave for five years when Elizabeth Petrovna, Empress of Russia and daughter of Peter the Great, visited Kiev. While she was there, she wanted to visit the Kitaev Hermitage, because an ancestor of hers had once lived there.

And while she was at the hermitage, someone mentioned Dositheos, the recluse who lived in a cave a little farther up the hill. The Empress decided that she had to meet him. Accompanied by bishops and nobles and government officials in their splendor, she walked to the cave and called for Dositheos to come out.

When Dositheos answered the call, he was overwhelmed by the sight that met his eyes. He fell to the ground before the Empress. She began to question him. And when she learned that he wasn’t a monk because the law forbade it, she ordered that he be tonsured immediately.

Or, as immediately as that sort of thing could be done. Which turned out to be the very next day. The Empress attended the ceremony. Dositheos asked that he be allowed to keep his name, rather than taking a new name, and that was allowed.

The Empress had brought attention to Dositheos. People began to recognize that God had granted him the gifts of wonderworking and clairvoyance. And as time went on, more and more people came to him for counsel.

That was a problem for Dositheos. It disturbed his solitude, for one thing. And for another, the older Dositheos got, the more likely it was that someone would start wondering why this hermit had no beard.

In old stories, hermits chose to be hidden as part of their humility. So it didn’t seem strange to the visitors when Dositheos created an opening at the entrance to his cave, through which he could talk with people, but not be seen.

Dositheos and St. Seraphim of Sarov

One of his visitors was a young pilgrim named Prochoros Moshnin. Prochoros was from a merchant family, and he wanted to become a monk. He sought out the hermit Dositheos for advice.

He and Dositheos spoke a long while. And finally, Dositheos told him, “Go, child of God, to the Monastery of Sarov, and stay there. That place will be to you for salvation. With God’s help, there you will finish your human wanderings on earth. Only, struggle to acquire the unceasing remembrance of God. Continuously call upon His Name, saying: ‘Lord Jesus Christ, Son of God, have mercy on me a sinner!’”

So Prochoros went to Sarov, where he took the name Seraphim. And as the years went by, Seraphim of Sarov followed all the instructions that Dositheos had given him, and became a beloved saint.

While Seraphim was acquiring the gift of the Holy Spirit, Dositheos struggled to balance his desire to live in seclusion and prayer with the ever-increasing demands of the people who came to see him for wisdom and counsel and miracles.

The death of Dositheos

By September of 1776, Dositheos was feeling old and tired. He was only 56 years old. But he knew he would not live to be much older.

One night, he left his cell and visited every monk of the Kitaev Hermitage, one at a time. He made a full prostration before each of them, and begged their forgiveness. Then he made his way back to his cave. He wrote a message on a piece of paper, holding it firmly in his left hand as he prayed.

In the morning, the other monks found Dositheos kneeling in front of his icons. The vigil lamp was lit. And Dositheos was dead. When the monks took the paper from his hand, they read these words: “My body is ready for burial. I beseech you, my brothers, to bury it according to custom, but without tampering with it.”

And here the stories diverge. Some stories say that when the monks took his body to prepare it for burial, contrary to the words on the paper, they discovered that Dositheos was a woman. Other stories say that this fact was only discovered later, when Dositheos’s sister visited the monastery. When she heard the story of Dositheos’s life from the monks, and saw a portrait of him, she knew for certain that this monk was the sister she had lost so long ago.

On his tomb, you can still read the words that his brother monks chose: “In the year 1776, 25 September, Dositheos reposed.”

From thy youth, O modest One, consecrated to God,
Thou didst prove to be as a Gift from Heaven
to the Church of Christ, O Dositheos.
Having changed thine appearance, and with it thy spirit,
Thou didst struggle manfully unto the end in a cave.
Wherefore do we honor thee, thou boast of Kiev!

St. Susanna, Deaconess and Martyr: When Susanna’s parents died, she decided not to marry. Instead, she freed her slaves, gave wealth to the poor, cut her hair, and became the monk John.

The Emerald of God, St. Euphrosyne of Alexandria: Instead of marrying the man her father had chosen for her, St. Euphrosyne ran away and became the monk Smaragdos, which means emerald.