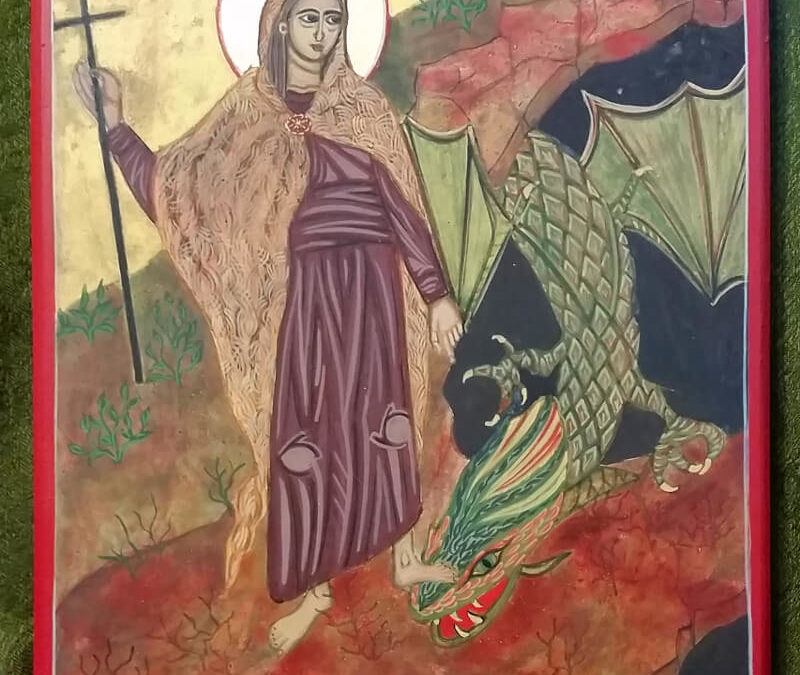 St. Elizabeth happens to be the patron saint of Catherine’s best friend, Elizabeth.

No, it doesn’t say anywhere in Catherine’s Pascha who Elizabeth’s patron saint is. Or Catherine’s either. But when you’re writing a story, you know more about the characters than you ever put in the story.

Catherine’s patron saint is Catherine of Alexandria. St. Catherine’s feastday is November 24, which means that Catherine’s name day always falls during Advent. She thinks it’s totally unfair, to have a name day during Advent. At least her godmother always makes her chocolate cake for her name day.

When St. Elizabeth was the abbess of a women’s monastery in Constantinople, the emperor decided to give her monastery a piece of land. The additional land would allow them to grow more food. There was a catch, though. The piece of land had a cave with a dragon! Nobody could grow food there, because the dragon was very fierce.

So St. Elizabeth did what any sensible abbess would do. She went to the dragon’s cave and said, ‘Dragon, come out!’ And when the dragon came out, she grabbed it by the tail and stomped on its neck. And that was the end of the dragon.

St. Elizabeth was also a wonderworker. She healed people of all manner of infirmities, whether of the body or of the soul. That’s one of the reasons that Elizabeth’s parents chose St. Elizabeth as their daughter’s patron. Elizabeth, on the other hand, thinks it’s very cool to have a patron saint who was tough enough to stomp on dragons.

The icon of St. Elizabeth is by the hand of Andrea Ward. She was an iconographer, an artist, an artisan, and a friend. May her memory be eternal.

Sasha and the Dragon: A Fairy Tale with Angels: If you’re looking for gorgeous, exciting, wonderful stories that reach into a child’s heart and show them everything that is there, you want this book.

Vasily and the Dragon: A Review: In this Russian fairy tale, St. Nicholas plays a major role in helping Vasily the Unlucky overcome all his troubles.