With Two She Flew: Philoxenia with angels and autism 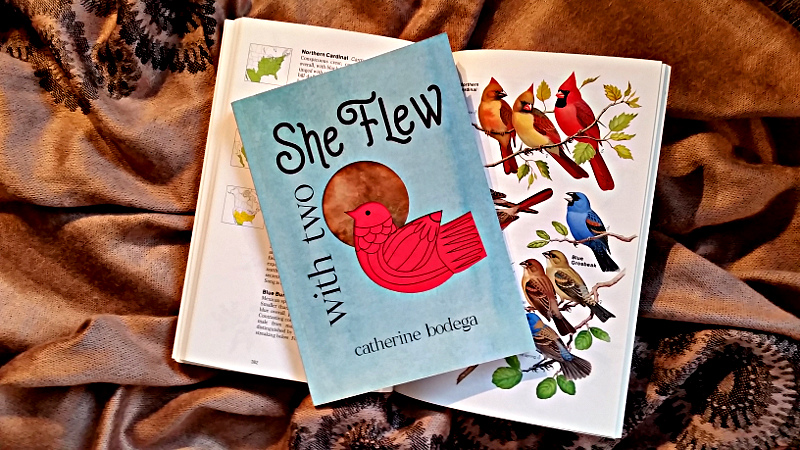 Because I ordinarily review picture books, the first thing I should tell you is that With Two She Flew is not a picture book. It is, however, an extraordinary book, quite unlike any other children’s book I have ever read. And it sits squarely at the intersection of the themes I am most interested in: disability, faith, and philoxenia. With Two She Flew has it all.

Listen to this review on SoundCloud.

Disability in With Two She Flew

Written by Catherine Bodega, who is herself autistic, the story is told from the point of view of an autistic child named Daisy. That alone makes this book a must-have. Many, perhaps most, children’s books with autistic characters are told from the point of view of a neurotypical friend or sibling. The reader is intended to identify and empathize with the friend or sibling. The autistic child’s role in the story is to help the neurotypical child learn and grow.

That’s not the case in With Two She Flew. The story centers Daisy’s perceptions, her experiences, her way of interacting with the world.

An autistic child reading the story will have the opportunity, perhaps for the first time, to identify with a character who is kind and strong and sometimes utterly overwhelmed by the intensity of her senses and of her emotions. They will get to identify with a character who has calm-down rituals, who uses a visual schedule to manage her daily routines, who wants and needs to feel safe. They will get to see their autistic needs presented matter-of-factly, with kindness and acceptance.

Just as important, a neurotypical child reading the story will also have the opportunity to identify with an autistic character. They will see Daisy’s autistic needs presented matter-of-factly, with kindness and acceptance. And in identifying with and understanding Daisy, they’ll be more accepting of the autistic people they encounter in their lives.

Faith in With Two She Flew

Daisy and her family are Orthodox Christians, and the events in the story happen in Daisy’s home and in her church. Just as Daisy’s sensory experiences and her emotions are more intense than other people’s, her spiritual life is more intense as well.

Daisy sees angels, and she hears whispered messages from the saints in the icons in her home and church. The angels and saints help her stay calm. And they reveal things to her, in words and in visions.

Those who know her best know about her relationship with the saints and holy things, and don’t treat it as anything unusual or remarkable. When they are at church on St. George’s day, her older brother, Gabe, asks her what St. George is saying, as if it were completely normal that she’d hear St. George.

This aspect of the story draws on a literary genre that is familiar to Christians in the traditions that venerate saints, but unfamiliar outside it. If you read the lives of saints, and are familiar with their stories, Daisy’s experiences will resonate with echoes of those stories. When Daisy’s mom explains that Daisy can see with her spiritual eyes, with her nous, you’ll nod. Of course. She’s like Mother Alexandra, who saw angels around her bed when she was a child, or that Native Alaskan man that St. Innocent knew, who saw angels all his life.

For readers outside this tradition, the story will read like magical realism. If fact, I keep finding myself comparing the story to Laurus, the magnificent Russian novel by Eugene Vodolazkin. Laurus is generally regarded as magical realism in a historical setting. It is a much larger story than With Two She Flew, far more complex, and far darker, but it, too, draws heavily on the traditional stories of the lives of the saints, especially the stories of holy fools.

Of course, Bodega wrote With Two She Flew for tweens, not grown-ups. And yet, it has most of the elements of magical realism. It’s set in the real world, but it has elements that are definitely not real-world. In that, it’s rather like Unusual Chickens for the Exceptional Poultry Farmer by Kelly Jones, or Crenshaw by Katherine Applegate.

But I suspect that Bodega would argue, and Daisy would insist, that there’s nothing magical in her story at all. I think Bodega would say that Daisy’s world is suffused with a reality that is, perhaps, more real than the world most of us experience. A world that is not magical, but miraculous.

A note for parents who don’t share Bodega’s faith

While Catherine Bodega is an Orthodox Christian, she doesn’t use With Two She Flew to preach or proselytize. Like many authors of diverse and multicultural stories, she writes what she knows, setting the story within her lived experience. The story is as appropriate for children who are not Orthodox Christians as it is for children who are, offering a window into a different culture for the former, and a mirror reflecting their own culture for the latter.

Philoxenia in With Two She Flew

People in ancient Greece, and early Christians, considered philoxenia one of the most important virtues. It was the virtue that St. Paul said would allow you to entertain angels without knowing it. If a stranger showed up on your doorstep, you were expected to welcome them as an honored guest. You would offer food, drink, and even a bath before asking questions of your guest. And you would, of course, protect them from harm while they stayed with you.

You can see the virtue of philoxenia in legends and folk tales, from the Greek story of Baucis and Philemon, to the Russian folk tale of Vasily and the Dragon, to the life of St. Alban, patron of refugees.

In With Two She Flew, Daisy’s church is sheltering a refugee family. The family is in the country legally, but one of the family members needs medical care, and their papers are somehow out of order. Daisy doesn’t know the details, and since she’s the narrator, you won’t hear the details either.

What Daisy does know is that the angels don’t like the two men visiting her church. And neither does her mom. The men are immigration agents, and they are trying to detain and deport the family the church is sheltering.

The family includes three girls, who are being hidden in an attic room at the top of a hidden staircase. Daisy thinks of the room as a nest. She knows the girls are safe there.

And with the encouragement of the saints, and the help of the angels, Daisy and the girls fight to keep them safe and reunite their family.

How to love strangers: Lessons in philoxenia: Like all virtues, philoxenia is cultivated through deliberate practice. Here are some ways to get started cultivating philoxenia in your life, and in the lives of your children.