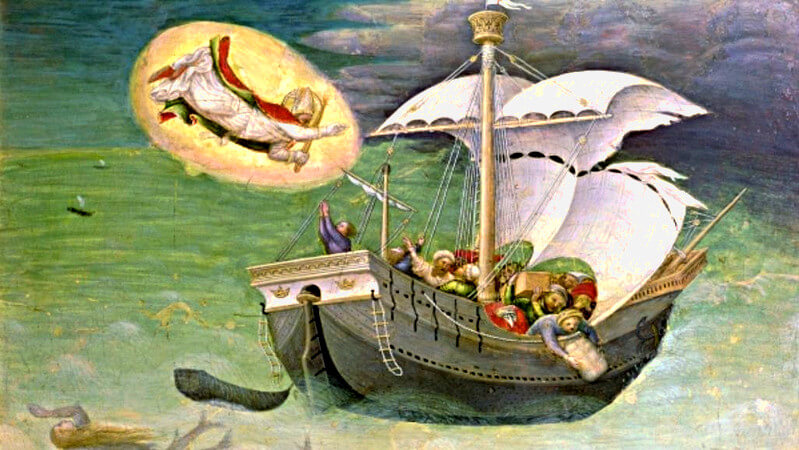 A bishop famous for his goodness

Before he became a bishop, St. Nicholas had been careful to do his good works in secret. He wanted them to be known only to God. But once he was a bishop, it was different. He was a leader, and leaders had to set a clear example. When members of his flock asked what they should do, he had to be able to say, “What you see me doing, do that.”

But that meant they had to see what he was doing. He couldn’t drop bags of gold through windows in the middle of the night. Not any more. Now, if someone asked for alms, he gave alms. If someone asked for help, he helped. Right then. In broad daylight.

And so he was, to his dismay, famous. People throughout the world knew about his goodness and his kindness. They knew he never turned away anyone who came to him for help.

When a ship was caught in a sudden storm, with fierce winds and enormous swells, the sailors were afraid for their lives. They did what they could, but they could see that it wouldn’t be enough. Some of them prayed as they struggled. And as they prayed, one of them remembered the good Bishop of Myra.

“Bishop Nicholas!” the sailor shouted into the wind. “Your grace, come help us!” Others, hearing his cries, joined their voices to his. “Bishop Nicholas! We need your help!”

The wind tore their voices from their throats and threw the words into the air. And coming back across the wind they heard a voice saying, “Behold, you have called me, and I am here.” And there, on the ship, was a man with a gray beard and the robes of a working man. No one dared ask him who he was.

Bishop Nicholas, if that’s who it was, endured the storm with the sailors. He worked with the ropes and the poles. He encouraged the weary, and strengthened the fearful. By his efforts, the ship made it through the storm to a calm anchorage in Myra. And then he was gone.

The sailors search for their helper

Once the sailors secured the ship, they headed for the city. They had to find Nicholas, the Bishop of Myra. If he had joined them on their ship, they owed him their lives. That was a debt that couldn’t be repaid. But they could, at the very least, give him their honor and gratitude.

The sailors made their way to the cathedral. As far as they could see, there was no bishop in residence. But there were many priests and deacons, and suddenly, one of the sailors saw him. The man from the ship. He was dressed like an ordinary priest, though. So was it Bishop Nicholas?

The sailors whispered among themselves. They approached the priest slowly, and then stopped. They waited for him to notice them. And they waited. Finally, one of the sailors spoke.

“Are you Bishop Nicholas?”

At that, the sailors all fell at his feet. They told him how he had appeared to them on the ship, at the moment they’d called for him. They told him that they were sure they were all going to die, but by his help, they had been saved.

The bishop looked at the sailors, and they felt like he was looking through them, into their very hearts. They didn’t like what they were sure that he saw.

“Children,” he said, “today I saved your lives, when you were caught in a storm. But you are, all of you, caught by a different sort of storm.”

One of the sailors almost spoke, then stopped. Bishop Nicholas looked at him a long while. “You called first. I heard your voice on the wind,” he said. “And I am glad you called. But your voice was almost drowned out by your companion, Injustice, which howled louder than the gale.

“And you,” he said, looking at another of the sailors, “you are bound to Avarice as to a master. And all of you have taken sexual immorality as your familiar friends. I could save you from the storm that threatened to shatter your ship. But I cannot save you from the storm that would shatter your soul. You must learn to do good, so that the Lord Himself will be with you when that storm comes.”

And then Bishop Nicholas smiled. “But come,” he said. “Stand up. You will dine with me tonight.”