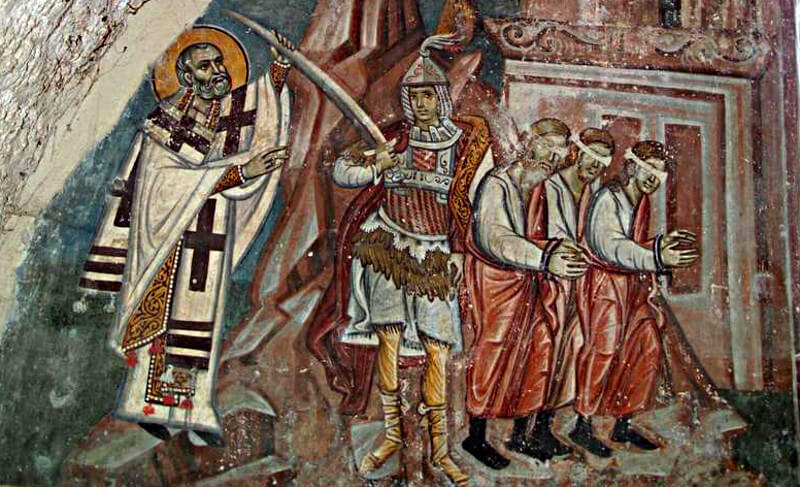 When my children were young, the story of St. Nicholas rescuing three innocent men from execution was their favorite of all of the stories of St. Nicholas. Like the story of the widower’s daughters, there is nothing miraculous about it — just fierce goodness. Because the story has been told and retold over the centuries, there are multiple versions of it. This is mine.

A commotion in the night

Nicholas had learned, in the emperor’s prison, to sleep through the sounds of screams and shouts and blows. But that was years ago, and now the sound seeped through, disturbing his sleep. He rolled over without opening his eyes. And then he heard his name.

He was awake in an instant, as he had been in prison. If someone called to him for help, he would be beside them if he could. Or, if he couldn’t get to them, he would pray.

And so he woke. The sounds, the voices, were coming from the yard in front of the inn. He strode to the window, threw open the shutters. “Who calls me?” he shouted into the confusion below.

It had taken time to calm things down and to get the story. Too much time. A rider had come from Myra. Eustathius, the governor, had accepted a bribe, a chest of gold, to have three men arrested, tried, convicted, and executed before Nicholas returned. Eustathius could make up any crime he wanted, use the gold to procure false witnesses and pay judges. Any gold left over would be his to keep.

The love of gold was stronger in Eustathius than the fear of God. He took the gold.

The trial, if you could call it that, had ended before the seventh hour. When he heard the verdict, the rider borrowed a good horse from a good man and rode through the day and the night to find Nicholas and summon him back to Myra.

The execution was set for the first hour of the morning.

Nicholas told the innkeeper to saddle the best horse in the village and bring it to him. He wasn’t expecting much. Certainly not the horse that the innkeeper brought to him. There had been such a horse in his father’s stables, and riding it had been a joy. But he was older now, older than he was then, older than the rider who had brought the news, and no longer accustomed to the saddle. He would have to ride through the night to get to Myra in time. But the roads were good, the sky was fair, the moon was full, and the horse was one men might dream of. By the grace of God, he just might make it.

Nicholas was dozing off in the saddle when he heard the first birds beginning their Matins praises. The moon was low in the west. He overtook a farmer heading towards Myra with a heavy wagon and asked for news.

“There will be crowds in the market today,” he told his bishop, “because of the executions.”

“With the help of God, man, there will be no executions,” Nicholas said. “Stop your cart and pray that I’ll not be too late.”

And so the man did, and Nicholas rode on. The lack of sleep, the constant motion, had brought on the pain in his head that had been his companion for so many years. But no matter. The blow from the soldiers had not taken his life. And he could still save the life of another.

As Nicholas entered Myra, he saw crowds pushing toward the execution field. He spoke to his horse, urging him to speed. The horse seemed to understand. He picked up his pace, and the crowd parted before him.

And Nicholas saw the three prisoners standing in chains. The first knelt on the ground and bowed his head. The executioner unsheathed his sword.

The horse Nicholas rode was trained for war. At the sound of the sword, he charged the executioner. Nicholas bellowed, “In the name of God, I command you: Stop!”

And for a moment, time itself may have stopped. The horse reared. Nicholas slid from his back and landed on his feet. Three steps, and he had his hands on the executioner’s sword. He wrested it away and threw it to the ground.

“There will be no killing today.”

Eustathius, the governor, was absent from vigil on Saturday, and absent from the Divine Liturgy on Sunday. On Wednesday, he came to see Bishop Nicholas privately. They talked past the time of dinner and well into the night.

When Eustathius returned to church many weeks later, he stood with the penitents, outside the nave. But he came. And he kept coming, until Bishop Nicholas granted him absolution and restored him to his former place.

What of the chest of gold? No story says what happened to it. Perhaps Eustathius gave it to the men he’d meant to kill. Perhaps St. Nicholas told him to distribute every bit of it as alms before he dared to set foot inside the Church again.

There’s no way to know. Penance is a private matter.

But the story of what happened on the execution field became widely known. Those wrongly accused would call on Bishop Nicholas, even when he was far away, and he would come to their aid. And there are those who say that he still comes to the aid of people in need today.

Stories from the Life of St. Nicholas: Learn how the stories we have about St. Nicholas developed over the centuries as they were told and retold by people who loved the saint.

Resources and reviews: Here’s a handy list of webpages and books where you can learn more about St. Nicholas, along with links to reviews of The Saint Nicholas Day Snow.